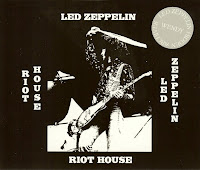 12/22/1972 London, England Riot House
Rock and Roll, Over the Hills and Far Away, Black Dog, Misty Mountain Hop, Since I've Been Loving You, Dancing Days, Bron-Y-Aur Stomp, The Song Remains the Same, The Rain Song, Dazed and Confused, Stairway to Heaven, Whole Lotta Love, Immigrant Song, Heartbreaker, Thank You
The tape begins with an announcer asking the crowd to sit down before Rock and Roll crashes into motion. Plant comments on how cold it is in the room before introducing Black Dog as "a song about a black labrador." He dedicates Misty Mountain Hop "to the Manchester CID... and may they have a very merry christmas." Page is on fire during an excellent Since I've Been Loving You. A highly dramatic performance. Plant introduces Dancing Days as "a song about summer and inebriation and good times," adding "this is one for everybody who might still be in high school." The Rain Song is fantastic.
Introducing Dazed and Confused, Plant tells the crowd "it's getting very close to christmas and if we were all as straight as we used to be, we should be at the office party now," adding "this is something that takes us nearly as far back as that." A frenzied jam is followed by the first appearance of the San Francisco interlude with lyrics, including early hints of Achilles Last Stand, prior to the bow solo. Page's fingers fly across the fretboard at lightning speed during the guitar solo/workout section. Plant's voice is strong during Stairway to Heaven, which is introduced as "one that hit us quite unexpectedly one night."
Plant comments on the number of requests coming from the crowd before Whole Lotta Love. The riotous Everybody Needs Somebody to Love section continues to expand in an explosion of energy. Plant gives his all during the boogie rap. The raucous medley includes Boogie Chillen', a heavy rendition of Elvis Presley's Let's Have a Party, Heartbreak Hotel, a fantastic I Can't Quit You Baby, featuring an amazing blues improvisation, and Goin' Down Slow. The intense sonic attack of Immigrant Song and Heartbreaker is followed by an epic, show-closing Thank You. An excellent performance. Must hear.
The first source is fairly clear, but somewhat noisy and hissy. The second source is clear and well-balanced, if a bit bass-heavy at times.