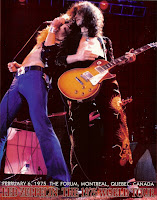 2/6/1975 Montreal, Quebec  The 1975 World Tour
Rock and Roll, Sick Again, Over the Hills and Far Away, In My Time of Dying, The Song Remains the Same, The Rain Song, Kashmir, No Quarter, Trampled Underfoot, Moby  Dick, Dazed and Confused, Stairway to Heaven, Black Dog, Heartbreaker
Plant continues to have trouble with his voice, he growls through the opening numbers. Page disappears briefly in the middle of Over the Hills and Far Away, just as the guitar solo is supposed to begin. As the song ends, one of the tapers announces "specially priced two record set on Kornyfone, Led Zeppelin live in Montreal!" Shouted requests for Hey Hey What Can I Do, White Summer, and Travelling Riverside Blues can be heard before In My Time of Dying, which Plant introduces as "something that takes us back to the original influences that started Led Zeppelin in the first place."
Page's fingers race across the fretboard during The Song Remains the Same. Before Kashmir, Plant explains the Mellotron to the crowd, saying "it is a very peculiar instrument because every time we take it somewhere, it goes out of tune." As the song ends, one of the tapers can be heard shouting "holy fuck!" The band is on fire during a fantastic performance of No Quarter. The instrumental section is an epic journey led by Page's excellent guitar solo. While introducing Trampled Underfoot, Plant tells the crowd "lyrics and connotations can be parallel, the motor car can be parallel to the body... this is a song about a motor car, but it's really all about cocks." Page shreds through an erratic guitar solo as Bonzo and Jones hold down a tight groove. Plant introduces Bonzo as "a bucket full of smiles" before Moby Dick, later calling him "Karen Carpenter" following the marathon drum solo.
Plant's howls echo through the arena during the mournful San Francisco interlude in Dazed and Confused. Page is on fire during the guitar solo/workout section. The thunderous Mars, the Bringer of War section is led by Bonzo's intimidating death march. Page solos wildly over the hypnotic, syncopated rhythm during the outro. An outstanding performance, the best of the tour thus far. As the song ends, one of the tapers can be heard exclaiming "I'm so fuckin' stoned!" Page blazes through an amazing guitar solo during Stairway to Heaven. Black Dog is devastatingly heavy. The band's return to the stage is met with a deafening cheer. Page holds back during the a cappella solo in Heartbreaker, but makes up for it during the frenzied fast guitar solo. As the band leaves the stage, Plant announces "Montreal, you are the best!" An excellent performance.
The tape is very clear and well-balanced. However, the frequent false stereo panning effect can be a bit distracting at times.