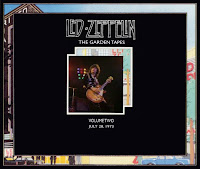 7/28/1973 New York, NY The Garden Tapes Vol. 2
Rock and Roll, Celebration Day, Black Dog, Over the Hills and Far Away, Misty Mountain Hop, Since I've Been Loving You, No Quarter, The Song Remains the Same, The Rain Song, Dazed and Confused, Stairway to Heaven, Moby Dick, Heartbreaker, Whole Lotta Love, The Ocean
The second of three nights at Madison Square Garden used to create the 1976 concert film The Song Remains the Same and the live album of the same name. The show gets off to a somewhat sluggish start. Plant's voice is tired and weak, cracking and breaking frequently. Page's fingers get a bit sticky during the guitar solo in Black Dog. As the song ends, Plant tells the crowd "we had a really good one last night... what we intend to do is try and get it better every night." The instrumental section during No Quarter is a haunting death march, featuring an excellent guitar solo from Page. The Rain Song is beautiful.
Before Dazed and Confused, Plant tells the crowd "amongst the mêlée in 1968, we managed to meet in a tiny room, not half the size of this stage, and we all looked each other in the face and we all reckoned we'd got something to do that we hadn't quite done properly before." Page's fingers get stuck in the strings constantly as he solos wildly through the erratic guitar solo/workout section. The theramin freakout during Whole Lotta Love is preceded by a fantastic funky jam. Page blazes through the guitar solo during the Boogie Chillen' section. Before the band closes the show with The Ocean, Bonzo counts in "hoochie coo, one, two, three, four, hoochie coo!"
The tape is an excellent soundboard recording augmented by a distant, noisy audience recording.
For a fascinating breakdown and analysis of how The Song Remains the Same was created, visit Eddie Edwards's The Garden Tapes.

Not a bad show, Once Plant warms up. Those of you who have TSRTS sdtk will notice that No quarter, TSRTS and the Rain song are from this night. The band sounds fantastic here (as they almost always did in '73) and the versions of No quarter and TSRTS are amongst the best ever. Must have for the historical significance of these 3 shows in NYC

You forgot to put Black Dog in the track listing!

so I did, good catch. thanks for reading!