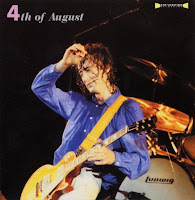 8/4/1979 Knebworth, England
Welcome to the 1979 Knebworth Festival
The Song Remains the Same, Celebration Day, Black Dog, Nobody's Fault But Mine, Over the Hills and Far Away, Misty Mountain Hop, Since I've Been Loving You, No Quarter, Ten Years Gone, Hot Dog, The Rain Song, White Summer/Black Mountain Side, Kashmir, Trampled Underfoot, Sick Again, Achilles Last Stand, In the Evening, Stairway to Heaven, Rock and Roll, Whole Lotta Love, Heartbreaker
Following a four year absence, Led Zeppelin make their triumphant return to England with two of the biggest shows of their career. However, despite two successful warm-up gigs in Denmark two weeks earlier, the band is still nervous to be performing for their home crowd after such a long break. The apprehension is evident as The Song Remains the Same gets underway. Page has lost the fluency of his Denmark performances, causing him to stumble a bit during the sticky-fingered guitar solos and Plant's voice is a little rusty at times. On the other hand, Bonzo is a thunderous explosion of energy, his powerful hammering is the backbone of the band. Following a high-speed Celebration Day, Plant greets the massive crowd, joking "I told Pagey that one or two people would be here, but he said he doubted it very much." Page's fingers get stuck in the strings during the guitar solo in Black Dog. Plant unleashes some spine-chilling shrieks during the initial verses. The band hammers through an abrasive Misty Mountain Hop.
Since I've Been Loving You is absolutely fantastic. Page leads the band on an intense emotional journey, tearing each note of the guitar solo from the depths of his soul. A phenomenal performance, one of the best in recent memory. Jones is introduced as "the man from Casablanca" before No Quarter. Page is on fire as he blazes through an excellent guitar solo, shredding furiously during the blistering outro jam. An outstanding performance. Plant shouts "come on, let's hoedown!" at the beginning of Hot Dog. The Rain Song is beautiful. The crowd erupts as a powerful Kashmir launches into motion. Plant's howls echo over the field and into infinity as the band thunders through the intimidating march. Page shreds wildly through the guitar solo during an incredibly aggressive Trampled Underfoot. The band hammers through a brutal Sick Again, introduced as a song that "relates the experience of the lobby and going down to get some cigarettes at ten thirty, rather than bein' in bed." Page tears through a frenzied guitar solo near the end of the song. Afterward, Plant jokes "so we got the cigarettes and carried straight on up to bed."
Bonzo thrashes wildly at his drums during an explosive Achilles Last Stand. Plant dedicates Stairway to Heaven to the crowd, thanking them for coming "on a blind date." Page blazes through a blistering guitar solo. The crowd sings the final line along with Plant. The first encore is preceded by ten solid minutes of cheering. As the band returns to the stage following a riotous Rock and Roll, Plant leads the crowd in a sing-along of You'll Never Walk Alone. The new arrangement of Whole Lotta Love is devastatingly heavy. As the song ends, Plant announces "thanks for eleven years." The band returns to the stage one more time to close the show with the first appearance of Heartbreaker since 6/21/1977. Page shreds wildly though the guitar solos. The crowd is left begging for more as the band leaves the stage for the final time.
The tape is a fantastic soundboard recording, augmented briefly by an audience source.

An absolute must have! One of my all time favourites beside How the West was won, the song remains the same (remastered version 2007), Vancouver March 19/1977, New York February 12/1975 and Earls Court.

Great version of Achilles Last Stand (you have to watch Jimmy on the DVD-- it was quite an emotional moment for him) and nice version of Kashmir. I love the version of Whole Lotta Love, too. But yeah, I agree with most people that it's not them at their best. They sound tight and nervous on a lot of the songs. I would actually recommend Frankfurt or Zurich of 1980 over this show. There's a lack of spontaneity and musical flow here.

You make this sound like a must hear yet it is not labeled one.

The band's performance at the Danish warmup gigs is superior, thus they get the 'must hear' label over the sometimes shaky Knebworth shows. I attribute this to the nerves the band may have felt in front of such a large, high profile crowd after an extended hiatus.

The widely available professional audio and video recordings of these shows tend to cause fans to view them in a more favorable light than the warmups, but while I understand the casual fan's affinity for the Knebworth shows, I disagree with this assessment.

Thank you for the reply, I was just confused about how glowing the second and third paragraphs were and I thought by that praise, it would have been a must hear. I listen to plenty of bootlegs and The Nobs are my favorite band followed by Rush and Pink Floyd.

Regardless, I still think the show was darn good.

Many shows have moments of brilliance, but it takes something special to lift a performance to the (entirely subjective) level of 'must hear'. My hope is that by not always choosing to highlight the obvious fan favorites, it will lead listeners to give shows that they would have otherwise ignored (due to sound quality, proximity to a more well-known show, etc.) a fair shake and be surprised by the magic that lies within.

Well put. There are plenty of overrated shows out there, while still good but not entirely amazing. I personally think that Madison Square Garden 1975, February twelfth is incredibly overrated but still an amazing show.