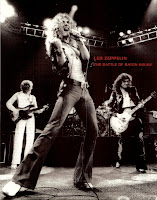 Rock and Roll, Sick Again, Over the Hills and Far Away, In My Time of Dying, The Song Remains the Same, The Rain Song, Kashmir, No Quarter, Trampled Underfoot, Moby Dick, Dazed and Confused, Stairway to Heaven, Whole Lotta Love, Black Dog

A loud pea whistle signals the beginning of Rock and Roll. Bonzo's thunderous pounding echoes off the walls of the arena as Page blazes through the guitar solos during Sick Again. As the song ends, Plant tells the crowd "hang onto your heads." In My Time of Dying is incredibly heavy. Bonzo hammers at his drums with unbelievable intensity during The Rain Song. No Quarter features Jones's first use of a grand piano. The instrumental section is absolutely fantastic. Page delivers an amazing guitar solo which ends in a series of violent outbursts with Bonzo. An outstanding performance, one of the best thus far.

Page shreds through an erratic guitar solo during Trampled Underfoot. Plant introduces Moby Dick as "one of the most exciting events that you're likely to see in the next ten minutes." The arena quakes under the power of Bonzo's thunderous assault. An utterly devastating performance, one of the best thus far. Dazed and Confused features a brutally heavy San Francisco interlude, now transformed into a haunting rendition of Woodstock. Page's fingers get a bit sticky during the frantic guitar solo/workout section. The return to the main riff is a chaotic explosion of energy. As the song ends, Plant announces "Mr. Jimmy Page, guitar... Baton Rouge, a really good audience... and Led Zeppelin, just a fun-lovin' bunch of boys." Stairway to Heaven features an excellent, dynamic guitar solo from Page. Plant unleashes some spine-chilling squeals during the theramin freakout in Whole Lotta Love. Page's fingers become hopelessly entangled in the strings during Black Dog.

The tape is very clear and well-balanced, if a bit boomy.

Been listening to a soundboard recording of this show. This has got to be one of the best (and my favorite) shows I've heard out of early-to-mid part of the 1975 tour. Absolutely great sounding tape along with a top-notch performance from Zep. Page's playing is great with an especially sharp and heavy vibe overall. Bonzo's drums are crisp and clear. A treat for the ears!

The soundboard elevates this, already a fabulous performance, to the level of "Must Hear", "Must Have", or whatever you want to call it. I myself feel this is even better than "Four Blocks In The Snow" as the best overall LZ show from 1975 and one of the best ever, but to each his own.