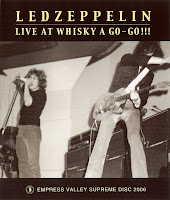 Very heavy version of As Long as I Have You, thanks mostly to Bonzo's relentless assault on the drums. The arrangement is very loose tonight with Page trying out a lot of different riffs and rhythms. Page's fingers are a little sticky, but his guitar sounds like a razor blade. The intro to Train Kept a Rollin' is a cacophony of thunderous drums and lightning guitar. Plant's harmonica collides with Page's guitar during the short solo.

Plant mentions the upcoming release of the first album before the first live recording of Babe I'm Gonna Leave You, performed in a style similar to the early studio outtakes. Dazed and Confused is introduced as "a number we wrote." Jones bends the notes of the intro for a strange effect. Plant, Jones, and Bonzo improvise through the bow solo. The guitar solo is an explosion with Bonzo attacking his cymbals nonstop. The first live recording of Killing Floor is much shorter and played at a much quicker pace than the eventual version of The Lemon Song that would appear on Led Zeppelin II. Plant's mention of Keith Relf draws a lot of applause, causing him to shout "too much!" His intro of For Your Love also brings a mention of Dave Dee, Dozy, Beaky, Mick & Tich. The Yardbirds classic is mostly a venue for an extended guitar solo/jam, which is unfortunately cut in the middle. Plant's goodnight brings shouts of "more!" from the crowd and another mention of the forthcoming first album.

The tape is very clear with Page and Bonzo in the front. Being an exceptional quality recording from such an early date (less than four months after their first live appearance) makes this a must hear.

Email ThisBlogThis!Share to TwitterShare to FacebookShare to Pinterest
Labels: *Must Hear*, ALAIHY, BIGLY, DAC, For Your Love, ICQYB, KF, TKAR

1969-01-05 Los Angeles, CA. Life at The Whisky A Go-Go!!! (EVSD)
Second listening for this (I listened to it yesterday during the run as well) on computer speakers while working. Sound for this is pretty good considering the age. Starts a bit rough but gets better quickly. All songs are impressive in this set. Plant's vocals are a bit soft, but the rest of the sound is solid. There seems to be some tape bleed, can hear some other music in the quiet parts. This version is 52:11 in length.

1969-01-09 Fillmore West, San Francisco, CA (Immigrant).
As far as I know, only one track is known to exist from this show, The Train Kept A Rollin'. Hissy, muddy, I'm sure the performance was solid. 4:16 in duration.

Better late than never! The tape sounds much better than the mess that is 12/30/68! The performance is much better too. Hopefully more of these Whiskey shows show up. Lemon Song/Killing Floor is my favorite tune of the whole set. Its nice to hear a clearer version of "For Your Love" too.

Considering these audio recordings are going to be close to 50 years old: The Whiskey tapes from 1-5-69 aren't too bad.