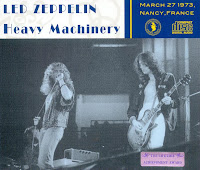 3/27/1973 Nancy, France Heavy Machinery
Rock and Roll, Over the Hills and Far Away, Black Dog, Misty Mountain Hop, Since I've Been Loving You, The Song Remains the Same, The Rain Song, Dazed and Confused, Stairway to Heaven, Whole Lotta Love
The tape begins during Page's guitar solo in Rock and Roll. Plant apologizes to the crowd for the show's late start before Black Dog, saying "it's not our fault... the promoter... un grand cochon." Someone near the taper mimics and sings along during a powerful Since I've Been Loving You. There is a brief cut in the tape just before the end of the song. Dancing Days and Bron-Y-Aur Stomp have been dropped from the setlist tonight. Plant flubs the lyrics a bit during the initial verses of The Song Remains the Same. Bonzo's stop-start rhythm gets a bit disjointed during the guitar solo. There are a few slight cuts near the end of The Rain Song.
Plant introduces Dazed and Confused as "a song that comes from a long time ago when Led Zeppelin was born." The end of Page's bow solo is interrupted by a loud squeal of feedback. There is a cut in the tape during the funky breakdown in the middle of the somewhat disjointed guitar solo/workout section. Page's intro to Stairway to Heaven is cut, leaving us at the beginning of the first verse. Another cut during the guitar solo leaves us at the very end of the song. Whole Lotta Love begins during the chorus prior to the theramin freakout. The raucous medley includes Boogie Chillen', Elvis Presley staples (You're So Square) Baby I Don't Care and Let's Have a Party, I Can't Quit You Baby, which features another excellent blues improvisation, and The Lemon Song.
The tape is a bit distant and muffled, slowly deteriorating over time.
Click here for audio samples courtesy of Black Beauty.