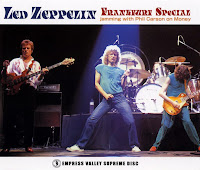 6/30/1980 Frankfurt, Germany
Frankfurt Special (thir13en remaster)
Train Kept a Rollin', Nobody's Fault But Mine, Black Dog, In the Evening, The Rain Song, Hot Dog, All My Love, Trampled Underfoot, Since I've Been Loving You, Achilles Last Stand, White Summer/Black Mountain Side, Kashmir, Stairway to Heaven, Rock and Roll, Money, Whole Lotta Love
The tape begins with a brief soundcheck before Train Kept a Rollin' explodes out of the gate. The band plays with renewed fervor as they hammer through the ferocious attack. Page blazes through an abrasive guitar solo during Nobody's Fault But Mine. Plant drowns his gravelly voice in a sea of echo during a devastatingly heavy Black Dog. As the song ends, he tells the crowd "it's quite nice to be back in these parts of the woods again, been a long time," adding "we were the first rock n' roll band ever to play in this place... when most of you were in your cradles and prams and stuff." The band missteps slightly in the middle of In the Evening, quickly getting themselves back on track. Hot Dog is introduced as "a song credited to some... extra-group happenings."
The band pulverizes the crowd with a brutal Trampled Underfoot. Plant barks aggressively as Page shreds frantically through the blistering guitar solos. As the song ends, Plant attempts to calm the rowdy crowd, warning "somebody's gonna get a little bit hurt, so stand... still." The band is on fire during an outstanding Since I've Been Loving You. Page's fingers are like razor blades as he tears through an emotionally charged guitar solo. Plant belts out each line as if it were his last as the song reaches its dramatic climax. An incredibly powerful performance, one of the best in recent memory. Achilles Last Stand is a thunderous epic, despite some sticky-fingered maneuvering from Page in the middle of the song. Plant introduces White Summer/Black Mountain Side as "a little virtuoso piece." Unfortunately, the impatient crowd forces Page to stop playing just before Black Mountain Side, saying "I can't hear me'self play for the noise down here... give us a chance, lads."
Plant delivers a powerful performance during an excellent Kashmir. As the song ends, he tells the crowd "sometimes we surprise each other." Page can be heard saying "think you might be able to keep quiet for this one?" before Stairway to Heaven. His fingers become entangled in the strings during a rather dull, uninspired guitar solo. Rock and Roll is a devastating explosion of energy. The biggest surprise of the night is Plant's introduction of Atlantic Records executive Phil Carson, who joins the band on bass for a brutally heavy rendition of Money, its first appearance since 6/19/1972. Plant pushes his voice to the limit as they chug through the bone-crushing rhythm. Whole Lotta Love is outstanding. Page is absolutely on fire during the riotous Boogie Chillen' section, which is followed by an impromptu rendition of Elvis Presley's Frankfurt Special. An explosive finale to an unbelievable performance. The band has finally managed to recapture some of their former glory, if only for one night. Must hear.
The tape is a fantastic soundboard recording.

I love the way that Trampeled Underfoot ends. Just one last note...squeezed out of Page's guitar. If you haven't had the chance listen to "Bertha Goes To Frankfurt"

If you like Zeppelin I've made a page collecting all their chords. Why not have a look if you play guitar?

I was supposed to see Zeppelin on the 1980 US tour that never happened. If this show is any indication, I missed out. While most of the 1980 tour of Europe was uneven, this show is great (particularly after Plant warms up his voice). Trampled under foot, SIBLY, the Rain song, In the evening and Money are great, but the highlight of the show is a fabulous WLL (Plant recaptures some of his pre-75 magic here). Easily the best version that they recorded since the '73 tour! Great show

This concert has my favorite All My Love guitar solo. It's short but beautiful. I wished they had allowed for more improv with this piece, live. It lends itself easily to that, in my opinion.

I was at this concert. It was awesome. Even smoked a bowl of hashish with Jon Bonham