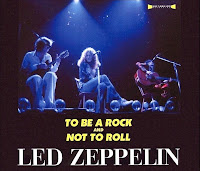 Rock and Roll, Sick Again, Over the Hills and Far Away, In My Time of Dying, The Song Remains the Same, The Rain Song, Kashmir, No Quarter, Tangerine, Going to California, That's the Way, Bron-Y-Aur Stomp, Trampled Underfoot, Moby Dick, Dazed and Confused, Stairway to Heaven, Whole Lotta Love, Black Dog

The tape begins with Nicky Horne announcing "for the next three hours, your mother wouldn't like it" as the band takes the stage. Things get off to a somewhat sluggish start, Bonzo sounds tired as he fumbles through the drum outburst at the end of Rock and Roll. Page's fingers get caught in the strings during the second guitar solo in Sick Again. As the song ends, Plant jokingly hints at Living Loving Maid during his usual "six and a half years" spiel. Page's fingers are like razor blades as he slashes and shreds through an erratic guitar solo during Over the Hills and Far Away.

In My Time of Dying is introduced as "a song that came from the deep south of America." The PA problems persist, causing Page's guitar to cut out briefly during the initial verses. Plant references Hey Joe, exclaiming "so I gave her the gun, and I shot her!" as Page launches into the first guitar solo. The band's timing gets a bit sloppy as the song progresses. Plant tells the crowd "it really is a treat to be playing in England again" before dedicating No Quarter to "anybody who's got any hope that everything can be okay in our wonderful country again." The instrumental section is transformed into a somewhat disjointed free-form improvisation featuring an excellent laid-back guitar solo from Page. Tangerine is introduced as "a song of love in its most innocent stages." That's the Way is beautiful. Page shreds wildly as Bonzo pummels the crowd during an erratic Trampled Underfoot.

Plant sings a few lines of Rip it Up before announcing "tonight, there's a lad watching his dad who is a remarkable drummer... he's a better drummer than eighty percent of rock group drummers today and he's eight years old, so... Jason Bonham, this is your dad!" prior to Moby Dick. The penultimate performance of Dazed and Confused is introduced as "a song that came at the very beginning of our time." Page solos wildly through the lead-in to the bow solo. The mournful Woodstock interlude is fantastic. Page erupts in a furious cascade of notes during the guitar solo/workout section, his fingers tear across the fretboard at lightning speed. The outro jam is extended beyond all limits. Stairway to Heaven is introduced as "a song which typifies the mood of hope, which in our brighter moments surrounds us." Page delivers a truly amazing guitar solo, building tension with each note as the epic drama unfolds. An unbelievable performance, one of the best thus far.

As the band returns to the stage, Bonzo announces "I'd like to say at this point that I think football is a load of bollocks!" to which Plant responds "I'd like to say that soccer is a wonderful sport, the best sport," adding "and that's got nothin' to do with Bonzo's sentiments." Whole Lotta Love features an excellent theramin freakout, which includes bits of Sex Machine and Turn on Your Love Light. A strong finish to a rather uneven performance.

The tape is a fantastic soundboard recording, augmented by a very good audience recording.

This Earl's court show is everything that the next night's show would be, except a little shorter. Plant sounds as good as he did in '75 and the rest of the band is at the peak of their powers here, particularly Page. Incredibly, the band spends almost 90 minutes playing D&C, No Quarter and Moby Dick alone! Stairway is fantastic! Maybe Page's finest hour and that's saying something. At over 3 and a half hours this is a marathon concert. The whole Earl's court series redeemed a somewhat lackluster '75 tour!

This is one of, if not THE, finest Led Zeppelin live performances ever. Everything about this speaks of perfection - quality of performance, quality of recording blending audience with soundboard, you name it. Anyone who says that Page was soaked in heroin and could not play, Plant's voice was gone in '75, etc., simply does not know what they are talking about. This is Led Zeppelin's finest 3 and one-half hours, and could easily be a commercial live release.

probably the best Earls Court show! The third nights is great also, well they ARE ALL Great! I always love watching this show, it is definitely my favorite show to watch, besides TSRTS. Hopefully one day Jimmy will decide to release more video! Like the other 3 nights here at Earls Court. or the other nights at Madison Square Garden 1973! Thanks for all of the great reviews you share! As i have said in previous comments, I have every zep concert bootleg known as well and you have helped me in the process of collecting! I used this blog as a reference so i was sure i had every date! My collection matches your reviews! Something like 260 concerts. So i very much appreciate all you do here! Thank you and LONG LIVE LED ZEPPELIN!!!!!!

I'm going to have to disagree with the three comments above and agree with the review. This show is one of (if not THE) most overrated shows in Zeppelin's career. The show is SLUGGISH as hell at the start and the momentum doesn't consistently pick up until Trampled Underfoot to my ears. I've never particularly got the praise for No Quarter here. It's decent with no major screw ups, but it's also not one of the best versions ever. Check out the version from the 2nd Earls Court show on the 18th. Now THAT is a great version. Unbelievable fluidity from Page and Jones kills it on the keyboards.

But I digress. Earls Court in general is pretty overrated (albeit with some great moments spread throughout the five nights). Listen to the March 21st Seattle show, or the March 12th Long Beach show to hear the band at their best in 1975.

I agree 100% with the comment above. Very overrated show, especially "No Quarter," which I often see singled out as one of the all-time best versions. The first half to two-thirds of this show is actually below-average, even by '75 standards. Quite sluggish and sloppy, especially Bonham, and the drummer is the last person who you want to have an 'off' night. "Tangerine" through the acoustic set, things start to pick up a bit, and then "Trampled Under Foot" to the end is pretty great, with all-time great versions of Trampled, Dazed, and Stairway, along with a good, long "Moby Dick," and a cool WLL featuring "Turn On Your Love Light".