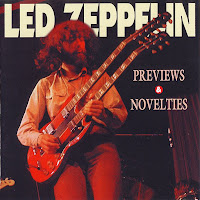 5/3/1971 Copenhagen, Denmark  Previews & Novelties
Immigrant Song, Heartbreaker, Since I've Been Loving You, Dazed and Confused, Black Dog, Stairway to Heaven, Going to California, That's the Way, What is and What Should Never Be, Four Sticks, Gallows Pole, Whole Lotta Love, Communication Breakdown, Misty Mountain Hop, Rock and Roll
Plant's frenzied wails battle feedback from his microphone during Immigrant Song. Page shreds through the a cappella solo in Heartbreaker. Just after the song ends, Plant sees a guard causing trouble with the crowd and shouts "Whoa! Stop! Stop!" before threatening to end the show if the trouble persists. He then asks that the crowd sit down before Since I've Been Loving You. The infamous Danish rhythmic clapping returns as Jones begins the intro to Dazed and Confused. Page performs some incredible finger acrobatics during the guitar solo. Bonzo and Jones are like a driving locomotive behind Page's ever-evolving guitar workouts. There is a slight cut just before the return to the main riff.
As Plant is introducing Stairway to Heaven, he quips "it goes on for some time, then it gets nice." He lets out an elegant howl just before the "bustle in your hedgerow..." section. That's the Way begins with a brief improvisation from Page. Plant announces that the band is going to try something they've never tried before, warning they may have to stop and try again if it falls apart. Instead they opt to play What is and What Should Never Be before attempting the first and only performance of Four Sticks (still without a title at this point). The rhythm is set in motion by Page with Bonzo and Jones joining in before the main riff begins. Once they settle into the groove, Plant's wails faithfully recreate the version on the fourth album.
After a surprisingly clean ending for a first attempt, Page begins playing the opening chords of Gallows Pole. The rest of the band joins in for the first complete performance of the song in a heavy electric arrangement. Before Whole Lotta Love, Plant announces "this number features Richard Cole on tablas, conga drums, and meditation." The medley includes John Lee Hooker's Bottle Up and Go, Elvis Presley favorites That's All Right and A Mess of Blues, and an excellent rendition of Muddy Waters's Honey Bee.
Communication Breakdown features a bass solo followed by the first reference to Celebration Day during the breakdown. As the band returns to the stage, Plant introduces "another new thing from the next album" before the first appearance of Misty Mountain Hop. Plant gets a bit lost at times, but the band quickly recovers. The show ends with Rock and Roll, introduced as "it's been a long time." Plant sounds exactly like he does on the fourth album. Amazing.
The tape is clear and well-balanced, with the drums sounding a bit distant. Definitely a must hear for the amazingly rare setlist.

"After a surprisingly clean ending for a first attempt, Page begins playing the opening chords of Gallows Pole. The rest of the band joins in for the first and only complete performance of the song in a heavy electric arrangement."

Anyways, this is a fantastic show, one of my favorites. Plant during SIBLY...wow. One of his best nights ever.

Ah yes, the infamous 'Gallows Pool'. A rare venture into the subject of aquatic capital punishment for the band.

Good catch, that one slipped by me.

The first commenter was pointing out that I'd mistakenly labeled the version of 'Gallows Pole' from this show as the only complete live performance, when in fact the band also played the song in Ipswich on 11/16/1971. The 'Gallow's Pool' reference comes from the title of a bootleg releases of that show.

This is a fantastic show for a couple of reasons. One is the setlist, another is the fact that this is one of the last recorded shows where Plant sings all the high notes with abandon. He supposedly injured his voice on 8/21/71 and you can begin to hear a difference in the way he sang by september '71. The band is awesome here as well

This may just be the best Zeppelin show of all time!

i just recieved the "Poles and Sticks" version of this show. . Its mark with the wrong date and the track listing at the end dont make alot of sense. .After downloading it and jamming through the ear pieces, I belive like most on this particular blog, that this probably top 5 "must hear". . I frequently use this site as a guide to the greatest band and the world's greatest show. .This particular night in Denmark they showed all of us that the planets were aligned, the angels had wings, and the Zep were truly the best in the world. . I still cant believe this show sat on ebay for $70 (black cat) while everyone is scavaging for EVSD or Trantura. . I should pay it forward so someone else can love this show as much as I (and a few others) believe this is a gem amongst gems. . Thanks for you guidence in these shows because id never know how great these were. I wear the signs on my back as a statement for a reason. . They truly are the best in the world. . past present and future.