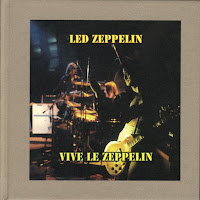 4/2/1973 Paris, France  Vive Le Zeppelin
Rock and Roll, Over the Hills and Far Away, Black Dog, Misty Mountain Hop, Since I've Been Loving You, Dancing Days, Bron-Y-Aur Stomp, The Song Remains the Same, The Rain Song, Dazed and Confused, Stairway to Heaven, Whole Lotta Love
The tape begins with Rock and Roll already in progress. Plant is in good form, belting out each line of Black Dog with power and bravado. This is the best he's sounded all year. Misty Mountain Hop is introduced as "a song about the English police and a bad case of hashish." Page is on fire during an incredibly powerful Since I've Been Loving You. As the song ends, Plant complains "I can't hear me'self, I don't know whether anybody else can."
The Song Remains the Same is utterly devastating, balanced perfectly by the delicate beauty of The Rain Song. Unfortunately, the latter is cut during the final verse. Page solos wildly during the frantic lead-in to the bow solo in Dazed and Confused. The instrumental machinery is unstoppable during the guitar solo/workout section. Bonzo and Jones are locked into each other as Page's fingers fly across the fretboard in a furious cascade of notes. Bonzo hammers at his drums with unbelievable intensity during the finale. Someone in the crowd can be heard mimicking Plant's Immigrant Song Valhalla cry before Stairway to Heaven. There are a few slight speed fluctuations during the initial verses.
Page hints at Knees Up Mother Brown before Whole Lotta Love, which is preceded by an erratic, angry intro. The theramin freakout is followed by a frenzied stop-start jam before the explosive Everybody Needs Somebody to Love section. Plant's boogie rap is interrupted by a blistering rendition of Don Nix's Going Down, its first appearance since 6/11/1972. Page blazes through the guitar solo during Boogie Chillen'. Unfortunately, the recording ends just as the band finishes an excellent rendition of Elvis Presley's (You're So Square) Baby I Don't Care. An amazing finale to the phenomenal 1973 European tour. Must Hear.
The tape is clear and well-balanced, if a bit overloaded at times, with a great sense of atmosphere.
Click here for audio samples courtesy of Black Beauty.