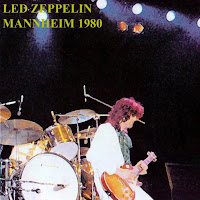 7/2/1980 Mannheim, Germany Mannheim 1980
Train Kept a Rollin', Nobody's Fault But Mine, Black Dog, In the Evening, The Rain Song, Hot Dog, All My Love, Trampled Underfoot, Since I've Been Loving You, Achilles Last Stand, White Summer/Black Mountain Side, Kashmir, Stairway to Heaven, Rock and Roll, Whole Lotta Love
The frenzy of the show in Frankfurt three days earlier hasn't completely worn off as Train Kept a Rollin' gets underway. Bonzo and Jones chug along at high speed as Page tears through a blistering guitar solo near the end of the song. Plant continues to have trouble reaching some of the higher notes during Nobody's Fault But Mine. Page's fingers get a bit stuck in the strings during the guitar solo. He tells the crowd "I've seen some of these faces before down the front, my god" before introducing Black Dog as "Strangers in the Night." As the song ends, Plant announces "before we carry on, we'd like to ask you if you would very kindly not... move like the ocean."
Plant introduces Hot Dog as "a token of our respect for the American country and western market," joking "either that or watchin' too many Burt Reynolds movies, I don't know which." Page shreds erratically through the guitar solos in Trampled Underfoot. Since I've Been Loving You is a disappointment, Page stumbles through a lackluster guitar solo. Bonzo sounds tired during the latter half of Achilles Last Stand, forgoing any complex fills for simple snare and bass drum patterns. Page wanders aimlessly through an uninspired White Summer/Black Mountain Side. There is a cut in the tape two-thirds of the way through Kashmir. Bonzo pummels the crowd with a series of thunderous fills toward the end of the song, hammering at his drums with incredible intensity.
The crowd cheers enthusiastically as Plant asks "does anybody remember laughter?" during Stairway to Heaven. Page delivers an excellent laid-back guitar solo. As Rock and Roll comes to a close, Plant tells the crowd "at this point we usually do a moody and walk off and pretend that we've gone, but we really haven't... but as we're a little bit tired to do that, we'll stay here just the same." The band closes the show with another outstanding Whole Lotta Love. Bonzo and Jones hammer through an excellent funky jam during the theremin freakout, which ends with an abbreviated Everybody Needs Somebody to Love section, its first appearance since 4/2/1973. Page blazes through a sticky-fingered guitar solo during the Boogie Chillen' section, which includes a brief reference to (Marie's the Name) His Latest Flame. A fantastic finale to a somewhat uneven performance.
The tape is another excellent soundboard recording.

Wow, amazing blog layout! How long have you been blogging for? you make blogging look easy. The overall look of your site is fantastic, as well as the content!
michigan upcoming concerts