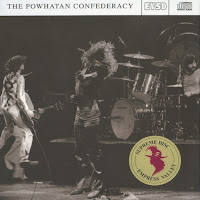 5/28/1977 Landover, MD  The Powhatan Confederacy
The Song Remains the Same, Sick Again, Nobody's Fault But Mine, In My Time of Dying, Since I've Been Loving You, No Quarter, Ten Years Gone, The Battle of Evermore, Going to California, Black Country Woman, Bron-Y-Aur Stomp, White Summer/Black Mountain Side, Kashmir, Over the Top, Achilles Last Stand, Stairway to Heaven, Rock and Roll
The show gets off to a shaky start with a somewhat sluggish The Song Remains the Same. Page is all over the place during the guitar solos. The band crawls through Sick Again at a snail's pace. As the song ends, Plant mentions that it's Memorial Day weekend, saying "we'll try and make your holiday just a little bit higher." In My Time of Dying is introduced as "a song that took its origins from the southern states of the United States of America, long before we were twinkles in our great, great, great grandfathers'... possibilities." Bonzo sounds tired as Page shreds through a laid-back Since I've Been Loving You. Plant complains about the heat onstage before introducing "the ivory keys of John Paul Jones" prior to No Quarter. Jones delivers a dynamic piano solo, which develops into an upbeat boogie/hard rock jam as Page and Bonzo join in. Page delivers an excellent guitar solo, although the band can be a bit disjointed at times.
Plant describes Jones's triple neck as "what looks like some remnant from Greek mythology" before Ten Years Gone. He sings "do you ever remember me, Benji?" following Page's first guitar solo, referring to the band's tour manager Benji LeFevre. Bonzo assists Jones in his backing vocal duties during The Battle of Evermore, which Plant describes as "an awake version of Crosby, Stills, Nash and Young" afterward. Page fumbles through a sticky-fingered White Summer/Black Mountain Side. Bonzo seems to be playing in slow motion as the band plods through a lackluster Kashmir. Ironically, Plant introduces him as "one of the more prolific timekeepers of the English rock movement" before Over the Top. The drum solo is unbearably long and boring. Plant tells the crowd "this song's given us a little bit of strength sometimes when we felt down, cause we knew it was a nice one" before Stairway to Heaven. The guitar solo section devolves into a disjointed mess by the end. The band closes the show with a sloppy Rock and Roll.
The tape is a slightly bass heavy soundboard recording, unfortunately wasted on one of the worst performances of the tour.
Click here for audio samples courtesy of Black Beauty.

I was there - I remember the doors were barred because it was a sold out show. I'm a big fan so I thought it was amazing even though your review wasn't very favorable. I remember Jimmy Page playing his guitar with a giant bow and the laser light show was amazing. I really enjoyed this concert and will always remember it. I felt lucky to have seen the Zep.

The show is actually very well performed considering the overall form of the 77' tour.

To me, the show starts out with a good amount of energy, but they generally lose steam as the show goes along. The show throughout is kind of sloppy. That said, it is an okay show. A lot of their "bad" shows are really not bad, just "okay".

In my opinion it's not a bad concert at all. It's true, they need to warm up a bit in the first two songs, but after that they put on a great show(with a few weak points). The only strange thing to me, that there are songs, where they seem to hurry a bit as if they want to get over with it, and also Robert doesn't talk very much between songs(if at all), which is uncharacteristic of him.

I just listened to this again, more carefully. It's the worst of the Landover shows, but not by that much, and it's better than Seattle. Only Stairway sounds really sloppy in the guitar solo section.

The issue with this show is the soundboard seems to run slowly. If you listen to the audience tape, the show is much more exciting and lively.

I was 16. It was sloppy at times but moving from the 3rd row on the side of the stage to 8th row, dead center helped with the sound. The acoustic set was amazing!