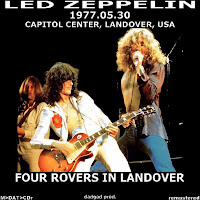 5/30/1977 Landover, MD  Four Rovers in Landover
The Song Remains the Same, Sick Again, Nobody's Fault But Mine, In My Time of Dying, Since I've Been Loving You, No Quarter, Ten Years Gone, The Battle of Evermore, Going to California, Black Country Woman, Bron-Y-Aur Stomp, White Summer/Black Mountain Side, Kashmir, Over the Top, Achilles Last Stand, Stairway to Heaven, Rock and Roll
The fourth and final night at the Capital Centre begins with a brief soundcheck before the band launches into The Song Remains the Same. The tape is terribly noisy and distorted. Fortunately, the sound clears up a bit as an incredibly heavy Sick Again begins. As the song ends, Plant reminds the crowd that this is the band's final show in the area, saying "you know what last nights in a town are... at least, I do." Page shreds wildly through the guitar solo during Nobody's Fault But Mine. Bonzo has some trouble keeping the beat during In My Time of Dying. Plant is in top form, belting out each line with power and intensity. Since I've Been Loving You is absolutely fantastic. Page erupts is a furious cascade of notes during the blistering guitar solo.
There is a brief cut in the tape during the second verse of No Quarter. Jones's dramatic piano solo develops into a frantic hard rock improvisation as Page and Bonzo join in. Page leads the band on an epic journey as he tears through an outstanding guitar solo. An amazing performance, one of the best in recent memory. Plant tells the crowd "at this point, John leaves the keyboards... and he makes his way quite casually while drinking wine behind the amplifiers" before Ten Years Gone, joking "that's the trouble with doin' three hours or more onstage, y'know, some of them can't keep the pace." Page blazes through the guitar solos with incredible fluency and precision. One of the best performances thus far.
Bonzo again assists Jones with the backing vocals during The Battle of Evermore. Plant sings a couple lines of Surrender before dedicating Black Country Woman to "Janeane's mom," adding "wherever you are mom, you got a wonderful daughter." Kashmir is incredibly powerful. Plant's aggressive howls echo through the arena and into infinity. Bonzo is introduced as "the man who once drank with Scott McKenzie" before Over the Top. Page has perfected his rendition of The Star-Spangled Banner within the experimental guitar solo. The band hammers frantically through a thunderous Achilles Last Stand. The brutal sonic assault is almost too much for the taper's equipment to handle. An unbelievably explosive performance, the best thus far.
Plant introduces Stairway to Heaven as "one that tracks down the history of modern day laughter." Page delivers an absolutely amazing guitar solo, one of the best yet. A truly outstanding performance. The crowd erupts as Whole Lotta Love begins. The band closes the show* with a riotous Rock and Roll. Plant unleashes a series of spine-chilling screeches during the explosive finale. A phenomenal performance. Must hear.
The tape is clear and well-balanced, if a bit noisy and overloaded at times. The quality improves gradually as the show progresses.
*- seconds before the end of the tape, the crowd begins cheering loudly as if the band was returning to the stage, possibly to play Trampled Underfoot.
Click here for audio samples courtesy of Black Beauty.

One of my favourite 77 shows, did you fail to notice the little mishap after the solo on NFBM?

I assume you mean Bonzo's errant cymbal crash as Page's guitar solo comes to a close?

In writing these reviews, my goal was to provide an overview of the show on a whole, along with any relevant or interesting details of the performance. Not necessarily to create a comprehensive list of minutia. Something like that surely would have taken much longer to write and be much less interesting to read.

Someone in the audience shot a bottle rocket at the stage which somehow managed to set Robert Plant's shirt on fire, which may account for the sloppy second half of NFBM.

I too am convinced the recording is missing a second encore for whatever reason...

Sorry to be the contrarian here but with the new soundboard release of 5/30, it's abundantly evident that the band is quite sluggish at the start of the performance and Bonzo, in particular, is not drumming at his best. He's solid but he's not drumming with the explosiveness of LA, that is for certain. A much better performance is 5/25 where the band has much more energy.

Can't think of a better performance of no quarter than this one and that's saying something. I'm really surprised not more people praising it.