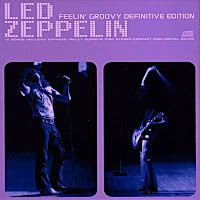 11/16/1971 Ipswich, England  Feelin' Groovy: Definitive Edition
Immigrant Song, Heartbreaker, Black Dog, Since I've Been Loving You, Rock and Roll, Stairway to Heaven, Going to California, That's the Way, Tangerine, Dazed and Confused, What is and What Should Never Be, Celebration Day, Whole Lotta Love, Weekend, Gallows Pole
The tape begins with a brief introduction from Plant before the explosive one-two punch of Immigrant Song and Heartbreaker. Plant is in top form, belting his lungs out with incredible power during Black Dog. Bonzo's pounding is like cannon fire during Since I've Been Loving You. The crowd is oddly quiet between songs. Rock and Roll is a raucous explosion of energy. Plant tells the crowd "the finest thing in the world is to smile" before Stairway to Heaven.
Plant's speech about San Francisco is repeatedly interrupted by feedback before Going to California. Page plays a bit of Black Country Woman after That's the Way. Plant acknowledges the unusual circumstance of the concert being held on temporary flooring over a swimming pool, jokingly telling the crowd "just think of the drop beneath you and the drop that might come eventually... we're all of one mind." The lead-in to the bow solo in Dazed and Confused continues to develop as a venue for heavy improvisation. Page, Jones, and Bonzo jam on The Crunge theme during an excellent guitar solo/workout section. Page is highly improvisational, with Jones and Bonzo locked in close behind.
Plant gives a rambling introduction about New York before a blistering Celebration Day. Page solos wildly during the extended theramin freakout section in Whole Lotta Love. The medley features an extended Boogie Chillen' jam, another great Hello Mary Lou, Elvis Presley's A Mess of Blues, and Muddy Waters's Honey Bee followed by an excellent blues jam. The band closes the show with Eddie Cochran's Weekend followed by the second and final appearance of Gallow's Pole, as requested by someone in the crowd. Similar to the heavy electric arrangement from 5/3/1971, it's a shame this wasn't played more often. An excellent performance.
The tape is a combination of at least two sources. Clear and well-balanced with a good sense of atmosphere.
Click here for an audio sample courtesy of Black Beauty.

This is definitely one of my favorite shows. Great sounding tape as well. As you noted, it's a shame about the crowd. They might as well not be there.

Hi,
I was there on that amazing night, and I can assure you the crowd was not quiet. We were told more than once to keep it down, mainly because the floor above the pool was moving about through the hammering on the floor, with the old Dr Martens and where I was it was mental.

This is one of a couple shows in november '71 wherein Plant sounds like he'd fully recovered from the vocal problems that plagued him during the summer months. He hots a lot of high notes and has great control and power. It's too bad that voice declined so quickly in '72, get all the boots you can from this fall UK tour, this is the last time the true Plant was heard

cant completely agree with paul m's assertion that Plants voice quickly declined in 72. have you heard how great he sounded during the 72 US tour especially LA Forum 6/25 as well as Long Beach two nights later in Arizona, the final show of the tour. Something definitely happened though between 72 US tour and Japan just 4 months later in Oct 72. You can hear a noticeable decline that got worse as time went on. He sounded downright awful on most nights in Late 72 and by the 73 US tour he could be painful to listen to. Just compare the way he sounded in the 73 US tour to how he sounded just one year earlier and you will hear the difference. Really noticeable on Over the hills and far away where he hits every high note in 72 he crokes and strains very badly in 73. Zep was still a great band but Plants voice would never be what it was in early 72 and before

Paul is right in that the Manchester show (11/24/71) on this tour is maybe Plant's last great show. However, Plant's voice in this Ipswich show cracks a lot, and his control is poor compared to his best shows in 1971. Others have noted that he was sick on and off in this UK tour; he sounds a bit sick to me on this night.

Regarding Anonymous #2's comments: Although the LA Forum is an incredible night for Plant for that era, he still couldn't reach the F5 and G5 high notes on SIBLY that he did consistently back in late 1970. Plant's voice was already starting to fray by the Aussie tour of 1972, if not before. The decline did indeed steepen dramatically after June 1972, though.

Personally, i'd say the Australian Tour of 1972 was the last time we saw Plant's voice in top form. The North American tour saw Plant's voice declining. Most performances of songs including "Immigrant Song", "Heartbreaker", "Black Dog", and "Stairway to Heaven" have him struggling on or dodging most of the higher notes. He did have some great performances still though. LA version of "Over The Hills and Far Away" is stellar.