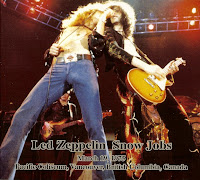 3/19/1975 Vancouver, British Columbia  Snow Jobs
Rock and Roll, Sick Again, Over the Hills and Far Away, In My Time of Dying, The Song Remains the Same, The Rain Song, Kashmir, No Quarter, Trampled Underfoot, Moby Dick, Dazed and Confused, Stairway to Heaven, Whole Lotta Love, Black Dog
The tape begins with a brief soundcheck before Rock and Roll crashes into motion. In My Time of Dying features some excellent slide work from Page. Plant exclaims "lick your pussy, yeah!" during the "oh Georgina!" section. The Rain Song is beautiful. Plant introduces Kashmir as "a song that talks about the wasted, wasted, wasted lands," adding "it's not California." No Quarter is absolutely fantastic. A series of echo-heavy theramin howls introduce Jones's outstanding piano solo. Page solos wildly as Bonzo and Jones explore an upbeat jazzy rhythm during the epic instrumental section. A phenomenal performance, one of the best and most complex thus far.
Page shreds erratically through the guitar solo during an aggressive Trampled Underfoot. Plant tells the crowd "a very serious part of the night has now arrived... where I nip off to the dressin' room to get a blow job" before introducing Moby Dick as "an experience you will never forget." He dedicates Dazed and Confused to Peter Grant, joking "he's the man who gives us the blow job in the dressing room." The ever-expanding Woodstock interlude now begins with a hauntingly beautiful a cappella guitar introduction. The bow solo is followed by an unusual quiet interlude, complete with ethereal howls from Plant. Page is absolutely on fire during the marathon guitar solo/workout section, shredding furiously as Bonzo and Jones race along at top speed. An unbelievably epic performance, clocking in at over thirty-seven minutes.
Stairway to Heaven is introduced as "one of the high spots amidst the haste." Plant introduces "Jimmy 'Jack Daniel's' Page" as the band returns to the stage. Whole Lotta Love features another excellent rendition of The Crunge prior to the funky theramin freakout. As the band leaves the stage, Plant announces "Vancouver, British Columbia... people of the realm, goodnight." Must hear.
The tape is another fantastic soundboard recording.
Click here for audio samples courtesy of Black Beauty.

This is an amazing show from 1975. First off, most of the shows from this era sound a little dull and Plants voice especially sounds very flat, but here he belts out the songs at the top of his voice showing that he still had some power left. I was especially surprised by black dog where he sounded weak even in the 73 tour and at earls court, but here his voice is powerful and the band carries on at breakneck pace. Bonzo is on fire and PAge too seems to be coming to his best. The best show from the 1975 tour that I have heard.