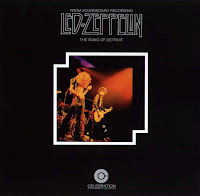 7/13/1973 Detroit, MI  The Song of Detroit
Moby Dick, Heartbreaker, Whole Lotta Love, Dancing Days
The tape begins with Plant introducing Bonzo as "the only white whale in show business!" prior to Moby Dick. The a cappella solo during Heartbreaker is followed by an impromptu blues shuffle. Page blazes through a sticky-fingered guitar solo during the Boogie Chillen' section in Whole Lotta Love. Plant hints at his Immigrant Song Valhalla cry during the coda. As the band returns to the stage, Plant introduces the first appearance of Dancing Days since 4/2/1973 as "a track about a fetish for fifteen/sixteen year old chicks who seem to wait at bus stops after they come outta high school." Unfortunately, the recording ends just over a minute into the song.
The tape is an excellent soundboard recording.
Click here for an audio sample courtesy of Black Beauty.