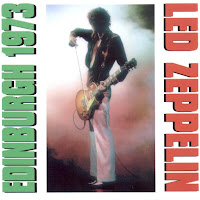 1/28/1973 Edinburgh, Scotland  Edinburgh 1973
Rock and Roll, Over the Hills and Far Away, The Song Remains the Same, The Rain Song, Dazed and Confused
The tape begins with Rock and Roll already in progress. Plant's voice is strong during The Song Remains the Same. Page shreds through the guitar solo. There are some distracting tape disturbances early in The Rain Song. There is a cut in the tape during the San Francisco interlude in Dazed and Confused. The instrumental machinery is in full swing during the guitar solo/workout section. Page solos wildly during the outro. The recording ends with Plant introducing the band as the crowd goes mad.
The tape is muffled and quite hissy.
Click here for audio samples courtesy of Black Beauty.