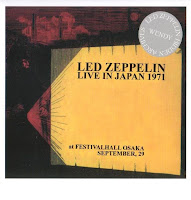 9/29/1971 Osaka, Japan Fatally Wanderer 929
Immigrant Song, Heartbreaker, Since I've Been Loving You, Black Dog, Dazed and Confused, Stairway to Heaven, Celebration Day, That's the Way, Going to California, Tangerine, Friends, What is and What Should Never Be, Moby Dick, Whole Lotta Love, Communication Breakdown, Thank You, Rock and Roll
The final night of Led Zeppelin's first tour of Japan begins with a simple "good evening, welcome to Osaka" from Plant. Bonzo can be heard shouting "louder!" before the count-in to Immigrant Song. Page's guitar solo is drenched in wah-wah. Bonzo can be heard saying "I can hardly play... me legs are like jelly, they won't do what I tell 'em to" as Plant greets the crowd after Heartbreaker. Page's guitar solo during Since I've Been Loving You is breathtakingly emotional. Someone in the crowd shouts "Black Dog!" as Plant is talking about the new album before introducing the same song. Bonzo sings along with Plant during the "sweet jelly roll" line. Page blazes through an excellent solo. As the song ends, Bonzo can be heard shouting "I'm falling apart!"
Plant jokes "common complaint in Osaka, rice in hair" and praises Japan to the crowd before introducing Dazed and Confused. The band are in a playful mood, joking with each other and having a good time between songs. Bonzo can be heard saying "they love a bit of comedy, don't they?" to Plant during the intro. Page's bow solo is hypnotizing. The epic guitar solo/workout section includes an amazingly beautiful, mournful rendition of Pennies From Heaven. A truly awe-inspiring performance, one of the best.
Bonzo shouts "more comedy, less work!" before Plant introduces Stairway to Heaven. Celebration Day is brutally frantic. Page plays a bit of Rudolph the Red-Nosed Reindeer at the beginning of the acoustic set. Plant asks if anyone in the crowd was at last night's show before another beautiful Going to California. Bonzo has gone missing before an excellent Tangerine, so Plant has the crowd shouting "Mister Bonham!" "Fuck you mate" Plant responds when Bonzo refuses to return to the stage. After explaining "we don't usually do things like this", the acoustic set ends with the first and only appearance of Friends. It's a shame this never became a regular part of the set. Plant sings a bit of Smoke Gets in Your Eyes before What is and What Should Never Be.
At Bonzo's urging, Plant introduces him as "Max Wall!" before the best Moby Dick thus far. Plant mentions "tomorrow we shall be in England" before Whole Lotta Love, which is preceded by an excellent heavy jam. The medley begins with an amazingly heavy intro to Boogie Chillen', followed by a great Tossin' and Turnin'. Page leads the band in an excellent, raucous rendition of Twist and Shout before a riotous Fortune Teller. Plant comes in early during the first verse of Good Times Bad Times, but the band quickly rights itself. The medley ends with a great funky jam followed by a very loose You Shook Me. An amazing performance, one of the best.
Plant sums up his feelings by saying simply "thank you very much for being great" before Communication Breakdown, which is preceded by a great herky-jerky intro. Page blazes through a frenzied solo before an excellent extended funky breakdown. One of the best performances of Thank You thus far is followed by a riotous Rock and Roll to close the show. A truly awe-inspiring performance from beginning to end, one of the best ever. Divine inspiration. Must hear.
The tape primarily consists of the so-called "soundboard" source, also thought to be just an audience recording captured from very close to the stage. The tape is excellent, perfectly clear and balanced. It gives the feeling of being onstage among the band, part of every interaction. Outstanding. This is augmented by a variety of alternate sources to fill the gaps.

Even as someone slightly tired of the song at the moment, I'd agree with the "Must Hear" on the basis of "Dazed and Confused" alone. Page's playing is focused and powerful throughout his versatile spectrum. If I could use only one live performance of a particular song to document his majesty on the instrument, I would use this one.

Immigrant Song features the longest "You're a Better Man Than I” solo of all time and features some excellent sounding wah-wah. Page handles the solo in Heartbreaker with precision. Plant is a little rusty in parts of the songs as he sings sometimes after his cue, but a very 80's-like solo turns Since I've Been Loving You into a dramatic piece.

The first stunner of the evening comes in the very long Dazed And Confused. The entire band is locked into one another. The eerie bow solo is followed by fast and loose workout section.  A one-time inclusion of Frank Sinatra’s "Pennies From Heaven" is included. The song ends with a bang at over 30 minutes in length.

Celebration Day is brutally perfect.  It is played very fast and includes extended solos.  Page plays a bit of Rudolph The Red-nosed Reindeer.  The acoustic set starts with back to back great performances of That's The Way & Going To California; the latter the longest version ever.  Another stunner is the only live rendition of Friends.   It is played very well considering the obvious impromptu playing of it.  Plant sings a few lines from Smoke Gets In Your Eyes afterwards.

Moby Dick is one of the all-time best ever played. It's ferocious intensity flies by and leaves you breathless.  Whole Lotta Love is in the top 5 ever! It starts with an on-the-spot excellent jam before immediately flying into the main riff.  Page is on fire as he creates new riffs right and left.  Another heavy jam precedes the Boogie Chillen' section. This is followed by a once-played Tossin' and Turnin' hybrid I Gotta Know which Page abruptly transforms into an excellent Twist And Shout, Fortune Teller, Good Times Bad Times & You Shook Me.  Mind blowing. Amazing.  This is the best Whole Lotta Love of 1971 and for sure a top 3.

The band closes the show with a nice improvisational Communication Breakdown, a beautiful Thank You and a quick “It’s Been A Long Time” request from Bonzo.  A very satisfying end.

The performance is something to relish.  Dazed And Confused is a one-of-a-kind performance that you could pick out from the others with no problem.  The band plays many rare songs and is very loose all night long, especially Jimmy who constantly is playing something whether it is in between songs or experimenting in the beginning and throughout the songs.  Plant has some miscues while singing here and there but gets better as she show progresses.  A major question for this show is Bonzo’s attitude.  He constantly complains about his inability to play saying things like “I can hardly play...me legs are like jelly, they won't do what I tell 'em to" and “I'm falling apart!".  He even urges Plant “"more comedy, less work!".  Bonzo even disappears from the stage throughout most of the acoustic set and refuses to come back before miraculously bringing out the bongos and playing a very nice Friends.  Beyond reason he somehow plays a 21 minute perfect Moby Dick.  These antics add to everything else the show has to offer makes it one of the best ever.  Performance: 9.5/10

The show consists of a very good recording of what is said to be a Soundboard source although it sounds mostly like a bass heavy audience recording from close to the stage.  A decent alternate source is used to fill in gaps throughout songs.  Throughout most of the songs Plant’s voice is distant along, but his vocals are nice and clear in between songs and in most of the acoustic set.  This seems to be due to the way the sound mixing was done at the auditorium.  The incredible part about this show is being able to hear all the on-stage banter between the lads.  You can hear them talking and goofing off like I’ve never heard before.  Audio: 8/10

A really good interesting and one-of-a-kind recording along with an unbelievably good show makes this the best performance of all the Japanese tours and a spot for everyone’s collection.  This is an extremely memorable show!  Overall: 9/10

I agree with the review above. This show is from a group of great shows in Japan and Oceania during the end '71, beginning of '72. Dazed and confused is remarkable (perhaps the best ever!) the acoustic set is fantastic and the quality and closeness of the recording coupled with the great song selection/improvisations makes this a definite must hear. One of the best Zeppelin shows ever!

Does anyone know of there's a version of this show out there with a complete version of Dazed and Confused. Mine cuts out during the lead-in to the final verse and comes back at the end of the coda.

The "extended funky breakdown" during Communication Breakdown is Watch Your Step by Bobby Parker.

Whoops. I pressed "publish" too soon, Watch Your Step was performed on the 28th.

The thing that separates this performance from several other Zep shows that are simply tremendous is this: it truly is a fantastic performance, but for a 1971 boot, the recording is fantastic as well. I don't know if the "soundboard" is in fact soundboard, but there are enough different versions of the entire concert floating around that one can easily compile a complete show in absolute stunning quality. Easily one of the best "must hear" or "must have" live Zep performances of them all.

The Kutabare Moonchild Title is the best version out there now. SBD merged with the best audience recording. simply stunning!

Kutabare Moonchild is really good, but incomplete. I actually really enjoy "Live in Japan 1971 929" 6CD on Wendy Label, 2016. It has the most complete SBD w/ Audience merge. The audience portion has some hiss, but I think more punch and clearer vocals. It's really tough comparing all the versions out there. Mayaku K-Satsu is also very good. They basically copied Kutabare Moonchild for cd's 7-9, but the other discs offer different views and great quality. There's also the BTRR version and a few others.