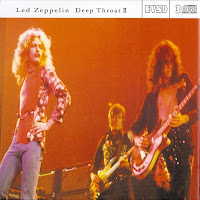 3/25/1975 Los Angeles, CA  Deep Throat II
Rock and Roll, Sick Again, Over the Hills and Far Away, In My Time of Dying, The Song Remains the Same, The Rain Song, Kashmir, No Quarter, Trampled Underfoot, Moby Dick, Dazed and Confused, Stairway to Heaven, Whole Lotta Love, Black Dog
The tape begins during the band's stage introduction. Plant's voice starts off a bit rough, the end of tour partying has begun to catch up with him. Page shreds erratically through the guitar solo during Over the Hills and Far Away. In My Time of Dying is a bit sloppy. Page's fingers become entangled in the strings during The Song Remains the Same. Jones's Mellotron goes out of tune during The Rain Song. No Quarter is introduced as "a piece which consists of a great deal of improvisation." Jones's piano solo is excellent. The instrumental section features a laid-back guitar solo from Page. Plant dedicated Trampled Underfoot to "all the good ladies of America who've helped us get rid of the blues from time to time on the road." Page's erratic guitar solo slashes through the frantic rhythm like a jagged razor blade.
Bonzo is introduced as "the man who broke every window in room 1019 last night, the man who set fire to his own bed, the amazing man with only two cavities, Mr. Quaalude, John Bonham!" before Moby Dick. Plant introduced Dazed and Confused as "a song that came to us about four hours after we got together... as soon as we'd rolled our first joint, this was it." Page solos wildly during the lead-in to the bow solo. After an ominously beautiful a cappella intro, the Woodstock interlude is transformed into a hauntingly mournful rendition of Spanish Harlem. Plant's ethereal howls echo through the arena as the piece comes to a close. Page erupts in a violent torrent of notes during the guitar solo/workout section. The climax is reached during the blistering outro jam. An outstanding performance.
Stairway to Heaven is dedicated to "the sweeter, more gentle moments in life." Page delivers a fantastic guitar solo, one of the best in recent memory. Plant pushes his voice to the limit during the final verse. Whole Lotta Love features and excellent heavy jam following a brief Licking Stick-Licking Stick interlude. Plant forgets the lyrics during the second verse of Black Dog, causing a moment of confused hesitation before the band gets back on track. As they leave the stage, he announces "people of The Forum, thank you very much... it is the summer of all our smiles, goodnight."
The tape is another excellent Mike Millard recording.
Click here for an audio sample courtesy of Black Beauty.

I really enjoy reading your reviews and want to thank you for them and for being so consequent and diligent! I'm especially looking forward to the 1977 reviews!
Benedikt

Thanks for reading and thanks for the kind words. I've got a pile of reviews lined up and ready to go, just have to get around to typing them all, so look out for a flood of new posts coming soon...