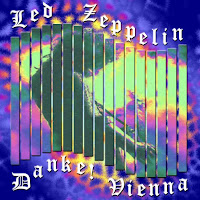 3/16/1973 Vienna, Austria Danke! Vienna
Rock and Roll, Over the Hills and Far Away, Black Dog, Misty Mountain Hop, Since I've Been Loving You, Dancing Days, Bron-Y-Aur Stomp, The Song Remains the Same, The Rain Song, Dazed and Confused, Stairway to Heaven, Whole Lotta Love, Heartbreaker
As the tape begins, a firecracker explodes in the crowd, to which Plant responds by booing. After Over the Hills and Far Away, he announces "tonight we must be very careful not to do too many things because Mr. Jones has... colic... so all your spiritual feelings must go straight to Mr. Jones's stomach." Misty Mountain Hop is introduced as "a song that in England is understandable because wherever you go to enjoy yourself, Big Brother is not very far behind." The initial verses of Since I've Been Loving You are beautifully restrained. Page's delicate passages build tension as Bonzo's thunderous pounding slowly grows in intensity. Plant introduces Dancing Days as "a song about little school girls... not too little, mind you... and my love for 'em" adding "but remembering what happened to Jerry Lee Lewis, I think I'll take it easy." Bonzo belches loudly into the microphone as Plant is introducing Bron-Y-Aur Stomp. The volume fluctuates wildly during the instrumental breakdown.
Before The Song Remains the Same, Plant announces "this song is for a club called the Moulin Rouge... and Mr. Bonham's delight at the Moulin Rouge tonight." Jones's Mellotron is missing during the first verse of The Rain Song. Plant's vocals are drowned in echo during the initial verses of Dazed and Confused. Page solos wildly during the frantic lead-in to the bow solo. An impromptu a cappella solo, punctuated by a thundering cascade of drums from Bonzo, introduces the frenzied rampage of the guitar solo/workout section. Page's wild improvisation is underscored by Bonzo's earth-shaking rhythms. The Mars, the Bringer of War section is a brutal assault. As the song ends, Plant sings a bit of Happiness is a Warm Gun.
Stairway to Heaven is dedicated to Daliah Lavi, with Plant adding "this song is for you Daliah, wherever you are." The Everybody Needs Somebody to Love section is absent from Whole Lotta Love for the first time since it's introduction on 4/9/1970. The raucous medley includes Boogie Chillen', Elvis Presley favorites (You're So Square) Baby I Don't Care and Let's Have a Party, I Can't Quit You Baby, and The Lemon Song. Bonzo hammers at his drums with incredible intensity during the finale. Heartbreaker is preceded by an excellent jam on a heavy riff. Page shreds through the solos. As the band leaves the stage, Plant tells the crowd "thank you very much, it's been a very nice night."
The tape is a combination of two sources. The first is a very clear audience recording that gets slightly noisy and muffled over time. The second is an excellent soundboard recording.
Click here for audio samples courtesy of Black Beauty.