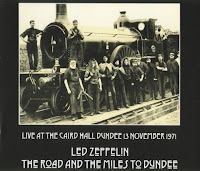 11/13/1971 Dundee, Scotland  The Road and the Miles to Dundee
Immigrant Song, Heartbreaker, Black Dog, Rock and Roll, Since I've Been Loving You, Stairway to Heaven, That's the Way, Bron-Y-Aur Stomp, Tangerine, Dazed and Confused, What is and What Should Never Be, Moby Dick, Whole Lotta Love, Communication Breakdown, Weekend
The tape begins with Immigrant Song already in progress. Plant again rushes the early verses during a crushing Black Dog. The tape is cut between songs. Since I've Been Loving You is powerful, Plant's screeching wails soar above Bonzo's thunderous pounding. The beginning of Stairway to Heaven is missing from the tape. There are a couple slight speed fluctuations during the guitar solo. The tape is cut during the final line, leading us into a series of speedups/cuts at the beginning of That's the Way. There are more speed fluctuations near the end of the song.
Bron-Y-Aur Stomp is interrupted by a loud screech of feedback near the end. A mournful Tangerine is plagued by speed fluctuations and dropouts. After more tape issues, Plant begins the first verse of Dazed and Confused with a spine-chilling wail. A cut during the third verse leaves us in the middle of the bow solo, which is marred with speed fluctuations until the tape cuts off during the guitar solo. Only the distorted intro and outro of Moby Dick survive, completely cutting the drum solo, before Whole Lotta Love. The speed fluctuations add an interesting new dimension to Page's theramin trickery during the freakout section. The medley includes Hello Mary Lou, Elvis Presley's A Mess of Blues, and Muddy Waters's Honey Bee followed by an excellent blues improvisation.
Plant tells the crowd to stay off the stage before Communication Breakdown, which features a great funky jam during the breakdown. Someone repeatedly shouts directly into the taper's microphone before the band returns to close the show with a riotous rendition of Eddie Cochran's Weekend. A good performance, unfortunately ruined by a bad recording.
The tape is muffled, distant, and plagued by constant speed fluctuations which get worse as time passes, rendering the recording almost unlistenable by the end. The least enjoyable listening experience I've encountered thus far.
Click here for an audio sample courtesy of Black Beauty.