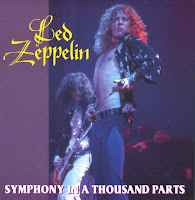 3/10/1975 San Diego, CA  Symphony in a Thousand Parts
Rock and Roll, Sick Again, Over the Hills and Far Away, In My Time of Dying, The Song Remains the Same, The Rain Song, Kashmir, No Quarter, Trampled Underfoot, Moby Dick, Dazed and Confused, Stairway to Heaven, Whole Lotta Love, Black Dog
The walls of the arena quake under the power of Bonzo's thunderous pounding as Rock and Roll crashes into motion. Plant has finally regained control of his voice, belting out each line with power and bravado. Page blazes through an extended guitar solo at the end of Sick Again. As the song ends, Plant attempts to calm the rowdy crowd, saying "don't get pushin' about cause it effects what we're tryin' to do." Page is in his own world as he shreds wildly though the guitar solo during Over the Hills and Far Away. In My Time of Dying is a cacophonous explosion.
Page's fingers fly across the fretboard during The Song Remains the Same. Plant begins a beautiful The Rain Song with "this should be the springtime of your lovin'." Kashmir is incredibly powerful, Plant is in top form. As the song ends, he asks the crowd to "do the obvious thing" and move back "so as the people in the front don't get their bellies tossed around in little bits and pieces." There is a brief dropout near the beginning of Jones's piano solo during No Quarter. The instrumental section features a mellow guitar solo from Page. Plant comes in late during the first verse of Trampled Underfoot, but quickly rights himself. Page's wild soloing echoes through the arena as Bonzo and Jones hold down the frantic rhythm.
Before Dazed and Confused, Plant tells the crowd "about six and a half years ago, we got together in a little room in London and decided that we should play a few tunes to see whether it was good or bad... the first thing that we played gave us the decision that we should never ever stop... this was it." His ethereal howls echo out over the crowd during the haunting Woodstock interlude. Someone near the taper can be heard shouting "louder!" during the bow solo. Plant unleashes a series of spine-chilling squeals as the guitar solo/workout section begins. Page shreds wildly as Bonzo and Jones race along at top speed. Plant tells the crowd "one day, not too long ago, a little bit of light came through to us and we hope we can pass it on to you" before Stairway to Heaven. Page delivers an outstanding guitar solo. Whole Lotta Love again includes The Crunge, complete with lyrics, prior to the theramin freakout. As the band leaves the stage, Plant announces "San Diego, thank you very much!" An excellent performance.
The tape is fairly clear, if a bit distant and noisy. Unfortunately, the sound quality deteriorates during the latter half of the show, becoming quite muffled and hissy.
Click here for audio samples courtesy of Black Beauty.

Good performance, boomy tape. It clears up as it goes along. The first 3 songs are a warm up. After "In My Time of Dying" the band is unstoppable. Plant spends most of the concert doing crowd control. No Quarter, Trampled Underfoot, and Dazed and Confused are my favorite moments. You need "bootleg ears" to listen to the tape.