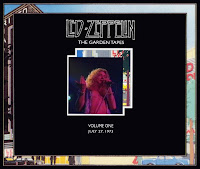 7/27/1973 New York, NY The Garden Tapes Vol. 1
The Rain Song, Dazed and Confused, Stairway to Heaven, Moby Dick, Heartbreaker, Whole Lotta Love, The Ocean
The first of three nights at Madison Square Garden used to create the 1976 concert film The Song Remains the Same and the live album of the same name. The tape begins just after the first verse of an excellent The Rain Song. The heavy section is incredibly powerful. As the song ends, Plant tells the crowd "that was a sort of a love song" before introducing Dazed and Confused as "a very old one." Several shouts of "sit down!" can be heard coming from the crowd during the intro. Page's fingers fly across the fretboard during the frantic lead-in to the bow solo. The San Francisco interlude is both hauntingly beautiful and devastatingly heavy. The band is absolutely on fire during the outstanding guitar solo/workout section. Page shreds wildly during the outro. An incredibly powerful performance.
Before Stairway to Heaven, Plant tells the rowdy crowd "I think this is a song of hope... and it is a very quiet song, so shut up." Page's fingers get a bit sticky during an otherwise fantastic guitar solo, one of the best thus far. Someone in the crowd can be heard repeatedly shouting "The Ocean!" prior to Moby Dick, which Plant introduces by saying "ladies and gentlemen, boys and girls, Elvis Presley has now left the building." Page's fingers get stuck in the strings during the guitar solo in Heartbreaker. He blazes through the Boogie Chillen' section during Whole Lotta Love. As the song ends, Plant calls out "New York, goodnight." Strings of firecrackers crackle in the distance as the band returns to the stage to close the show with The Ocean.
The tape is a combination of two sources. The audience tape is fairly clear, if a bit overloaded and noisy. The soundboard tape is excellent.
Click here for audio samples courtesy of Black Beauty.
For a fascinating breakdown and analysis of how The Song Remains the Same was created, visit Eddie Edwards's The Garden Tapes.

Agreed on the STH solo... it's one of the best that I've heard, too.

The Stairway To Heaven Solo does not have "sticky fingers" at all. It is one of the best--if not the best--improvised solos ever performed. That was the first and only time that solo was performed that way. And it is AWESOME! :-D