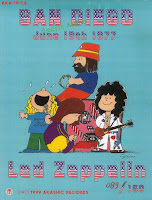 6/19/1977 San Diego, CA  Jimmypy
The Song Remains the Same, Sick Again, Nobody's Fault But Mine, In My Time of Dying, Since I've Been Loving You, No Quarter, Ten Years Gone, The Battle of Evermore, Going to California, Mystery Train, Black Country Woman, Bron-Y-Aur Stomp, White Summer/Black Mountain Side, Kashmir, Achilles Last Stand, Stairway to Heaven, Rock and Roll
The show gets off to an uneven start with a sluggish The Song Remains the Same. Bonzo struggles to keep the beat as Page tries in vain to speed things up. By the beginning of Sick Again, it's obvious Bonzo's having an off night. Completely missing his cues during the intro, he crawls through the rest of the song at a snail's pace. As the song ends, Plant tells the crowd "we're not gonna do too much spieling, cause I heard the live album, so we'll just play a lotta music instead." Bonzo continues to struggle during Nobody's Fault But Mine. Page shreds through a sticky-fingered guitar solo. Plant exclaims "oh my Audrey!" near the end of In My Time of Dying. As the song ends, he mentions that Jones is having trouble with his back, joking "it's about time that somebody noted it down in the press that John Paul Jones doesn't just play backgammon."
Page is on fire during Since I've Been Loving You, which features mournful organ accompaniment from Jones. Unfortunately, Bonzo's erratic drumming frequently disrupts the somber mood, preventing the piece from ever really coming together. Jones's piano solo develops into an excellent hard rock jam as Page and Bonzo join in during No Quarter. Page's guitar solo gets off to an excellent start, but is quickly derailed by Bonzo's disjointed overplaying. Plant introduces the acoustic set as "our version of a sort of a Californian Crosby, Stills, Nash and Bonham" before The Battle of Evermore. He forgets some lyrics during an otherwise beautiful Going to California.
Page and Plant get into a fantastic impromptu rendition of Mystery Train before Black Country Woman. Bonzo is absent for the remainder of the acoustic set. Page plays a bit of Dancing Days during Bron-Y-Aur Stomp. Plant is in top form during Kashmir, belting out each line with power and bravado. Bonzo is constantly on the brink of falling apart while still managing to deliver some very lively passages at times. The crowd erupts as the band launches into Achilles Last Stand. Page blazes through an outstanding guitar solo during Stairway to Heaven. As the band leaves the stage, Plant tells the crowd "it's good to be back San Diego, it really is good to be back, goodnight."
The tape is another excellent Mike Millard recording.

Is this the only show Bonzo ever had a bad night? Aside from 9/29 where he had the trots?

And while 9/29/71 may not have been Bonzo's favorite night personally, it is by no means a bad night performance-wise.

From this show until June 25th or 26th, Robert's voice is in its best shape on this tour. You can hear it especially on SIBLY, Ten Years Gone, BOE, Going to California, and the end of Achilles' Last Stand, not just in this concert, but in most of the LA shows. While I admit that he hits more high notes in 1980 on Rock and Roll and STH, he does it only in his new "barking" style (ala "In the Evening"), which I don't like as much as his "whiny" style. At any rate, his top, non-falsetto, range is lower than in 1973 in any of these shows, but as a plus, his voice cracks much, much less than in 1973 or 1975.

I disagree with the reviewer regarding Jimmy's solo on STH. While technically impressive, I found it a bit boring. As for his overall performance, it's always nice to hear a 1977 show in which he sounds drug-free and plays fluidly. I feel like this section of the tour was a high point for Jimmy. Starting in the NY shows, he seems more consistently "on". (The Maryland shows vary from very strong (the 30th) to really sloppy (the 28th).) He continues strong through the LA shows.

Of course, following one of the very worst performances in his career, the next show (June 21) has one of Bonzo's best, if not his very best performance captured on tape.

IMO due to the state Bonham was in on the night, this is one '77 show that should have been cancelled or postponed...his sloppy playing ruins the performance IMO, no matter how hard Plant, Page and Jones try to make up for it. Jimmy Page having an off night is one thing, John Bonham having an off night is another thing entirely. He should have begged off performing that night, like he did in Nuremburg in 1980.

Listening to Nobody's Fault but Mine on You Tube from this gig. Plant sounds great, but the tempo really is off. Page is fine, but this is one where the non-Zeppers will look at us and say we tend to overlook any and all faults. I can only respond with a bad zep is better than a good anybody else most of the time. I think the Who and Pink Floyd and the Stones? on a great night can top Zep on less than stellar night. But even ok Zep is great to me. So far I've only heard this number and Bonham isn't horrible or anything, just not his "normal" self.

Was this the only time they used the Hammond on SIBLY on this tour? What an odd show.