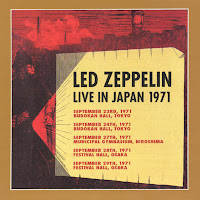 9/24/1971 Tokyo, Japan  Live in Japan 1971
Immigrant Song, Heartbreaker, Since I've Been Loving You, Black Dog, Dazed and Confused, Stairway to Heaven, Celebration Day, That's the Way, Going to California, Tangerine, What is and What Should Never Be, Moby Dick, Whole Lotta Love, Thank You, Communication Breakdown
The intense sonic attack of Immigrant Song is too much for someone near the taper who repeatedly shrieks with delight. Page shreds through the solos in Heartbreaker, again including The 59th Street Bridge Song in the a cappella solo. Since I've Been Loving You is epic and powerful. Black Dog includes the first appearance of Plant's "sweet jelly roll" lyrics.
Equipment troubles leave Page without feedback at the beginning of the guitar solo during Dazed and Confused. There is a great full band funky jam during the guitar workout section. Plant tells the crowd he doesn't like playing during daylight hours before Celebration Day. He makes a brief reference to Friends before That's the Way. "What used to be San Francisco" is compared to Pompeii before Going to California. The acoustic set ends with the first appearance of Tangerine. Plant sings a couple lines from Friends a cappella before Moby Dick.
Someone in the crowd shouts "Robert Plant!" before Whole Lotta Love, which is preceded by a heavy stop-start jam. The very disjointed medley begins with Boogie Chillen' with Cocaine Blues lyrics. An excellent Rave On! is followed by the first appearance of Your Time is Gonna Come. A strange rendition with Plant singing the first verse as the band tries to remember how to play the song. Jones even resorts to playing the bassline from Ramble On until Page brings them around for a haphazard chorus. I'm a Man is followed by The Hunter section from How Many More Times before another great Hello Mary Lou. Plant gets the band into a heavy jam based on Albert King's Oh, Pretty Woman before returning to How Many More Times. The show ends with Communication Breakdown, which includes lyrics from the bow section of How Many More Times on the first album during the breakdown. A very interesting afternoon set.
The tape is fairly clear, but terribly overloaded, making it a bit hard on the ears.

Just downloaded a version of this show from Sporpio and I don't know how this one sounded, but Scorpio's version is pretty much perfect.

Source 3 is indeed overloaded, but worth it just for the magnificence of the performance. It's incredible. Every show from this tour is a complete masterclass in Rock.
As good as it ever got.