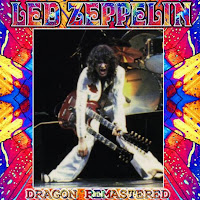 7/17/1977 Seattle, WA Dragon Remastered
The Song Remains the Same, Sick Again, Nobody's Fault But Mine, Over the Hills and Far Away, Since I've Been Loving You, No Quarter, Ten Years Gone, The Battle of Evermore, Going to California, Black Country Woman, Bron-Y-Aur Stomp, White Summer/Black Mountain Side, Kashmir, Over the Top, Achilles Last Stand, Stairway to Heaven, Rock and Roll
Following a three week hiatus, the band returns to the states to begin the ill-fated third leg of the 1977 North American tour. The break has left everyone a bit rusty and it shows as The Song Remains the Same gets underway. The spark of energy present in some of the earlier performances has died down and the result is a band that sounds tired, despite Bonzo's efforts to inject some excitement into the proceedings. Plant's vocal troubles have returned and Page's fingers become hopelessly entangled in the strings of his guitar at the end of Sick Again. As the song ends, Plant mentions "Jimmy's got a touch of sleepin' sickness" before telling the crowd "what we're gonna try and do is play, and play, and play... nonstop."
Over the Hills and Far Away is introduced as a song "about some part of the holy land." Page gets lost during a disastrous, out of tune guitar solo. Jones wanders off track during the transition back to the main theme. Page stumbles during the intro to Since I've Been Loving You. Bonzo thrashes wildly at his drums as the song reaches its frenzied peak. Jones's piano solo develops into a laid-back boogie shuffle as Page and Bonzo join in during No Quarter. Page shreds wildly through an erratic guitar solo. The band fumbles through a lackluster Ten Years Gone. Plant completely loses control of his voice near the end of The Battle of Evermore. He can be heard coughing off-mic as the song comes to a close.
Going to California is dedicated to "anybody who's come from Alaska." As the song ends, Plant tells the crowd "I think it's about the lousiest thing that you can possibly do, to throw firecrackers." Page once again breaks a string during Bron-Y-Aur Stomp, leaving Jones to improvise a short bass solo, which transforms into a tongue-in-cheek rendition of It's All Right With Me as Plant and Bonzo join in. Kashmir is dull and uninspired. Equipment troubles force Page to abandon the electronic noise section during the experimental guitar solo. The band is all over the place during a disjointed Achilles Last Stand. Page blazes through an epic guitar solo during Stairway to Heaven. The band closes the show with a quick and dirty Rock and Roll.
The tape is a bare bones soundboard recording.

Over The Hills wasn't disastrously out of tune, but the concert WAS fairly lackluster. Stage fright from being filmed you think? :P

Still, that Stairway solo brings tears to the eyes.

Again, another show best appreciated through the audience recording, the sloppy, lackluster performance really shows through on the 'soundboard' (actually video feed) recording.

Now that the film is available and synced up on youtube, this show takes on a really enjoyable vibe. Zep is feeling loose and, though robert says he can't hear out of one ear for half the show, you see a band that loves to play, is having a good time, and really enjoys being THERE in Seattle.

Sick again is what it is, and it's supposed to be sick. Page often wanders around in that solo, and it always feels like a warm up song.

Over the Hills was good, and Page is in experimental mood on this evening, which is the main reason to listen to this show. Jones is goofing around during Battle of Evermore, singing it like a cheezy jazz club singer might. Bonham is solid throughout, and the drum solo is an incredible adventure.

No Quarter is the piece de resistance. Once they get through the boogie woogie (which I'm not partial too either, but they also did in LA on this tour), Page goes to work and slowly builds a great piece of dissonant jazz that's far out of context any typical guitar playing. In the video you can really see he's getting the noise he wants, and this is Jimmy at his best and most experimental, despite the sleeping sickness Plant mentions. It also clears up the hearing in Plant's ear!

From that point, I'm hooked and he can do no wrong. This is a great show for all the non-technical reasons Zep is the greatest band to ever walk this earth. This show was a good, good time, and the looseness of it all sets the spirit of the band spilling over the top.