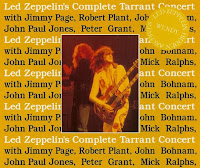 5/22/1977 Fort Worth, TX  Complete Tarrant Concert
The Song Remains the Same, Sick Again, Nobody's Fault But Mine, In My Time of Dying, Since I've Been Loving You, No Quarter, Ten Years Gone, Going to California, Black Country Woman, Bron-Y-Aur Stomp, White Summer/Black Mountain Side, Kashmir, Over the Top, Achilles Last Stand, Stairway to Heaven, Rock and Roll, It'll Be Me
Bonzo comes out swinging as the show gets underway, pummeling his drums in a frantic stampede during The Song Remains the Same. The frenzy continues as the band hammers through a devastatingly heavy Sick Again. Page shreds wildly as Bonzo and Jones decimate the crowd with their bone-crushing rhythm. The combined sonic assault threatens to destroy the taper's equipment. As the song ends, Plant apologizes for the delay amidst shouts of "sit down!" from the crowd. Page blazes through a nasty guitar solo during Nobody's Fault But Mine. In My Time of Dying is an aggressive cacophony. Page begins the intro only to stop moments later and start over, with Plant joking "there's a few clowns onstage too." Bonzo hints at The Crunge briefly toward the end of the song, throwing Page's timing off in the process.
Page is on fire during an incredibly powerful Since I've Been Loving You. His fingers tear across the fretboard in a furious cascade of notes during the blistering guitar solo. Jones's piano solo during No Quarter features another frenzied rendition of Nut Rocker. Bonzo drives the band forward, experimenting with a variety of rhythmic textures as Page delivers a long, wandering guitar solo. Ten Years Gone is introduced as a song "about the love that you always cherish in your heart and never forget." Unfortunately, the song is cut during the first guitar solo. The beginning of Going to California is met with a loud cheer from the crowd. The arena quakes under the power of Bonzo's thunderous pounding during Kashmir.
Plant introduces Bonzo as "the man who only last night was standing in the wardrobe when a fist went straight through the door and hit him on the nose" before an epic Over the Top. Page's inclusion of Dixie and The Star-Spangled Banner during his experimental guitar solo draws cheers and applause from the crowd. Bonzo thrashes wildly at anything within reach during an aggressive Achilles Last Stand. Plant dedicates Stairway to Heaven to "all the people who've made our stay really pleasant." The encore begins with the first appearance of Whole Lotta Love since 5/25/1975, although only as a minute-long prelude to Rock and Roll. The latter features an odd stuttering intro from Bonzo. The biggest surprise of the night comes as Plant introduces Mick Ralphs of Bad Company on second guitar before an excellent impromptu rendition of Jerry Lee Lewis's It'll Be Me. As the band leaves the stage, Plant announces "Led Zeppelin are now gonna get it off, goodnight."
The tape is a combination of three sources, ranging in quality from clear to distant and noisy.

Yep, and its clean as a whistle. Probably the best source I've heard from the 77 tour. Good stuff.

Probably my favourite show from 77 outside of the la forum shows.

I recently bought the new soundboard of Forth Worth 77 and I can't stop listening to it. It's a rollicking romp of a show, very loose, fun and easily one the best shows from 1977. I believe Robert says that there are a few "clouds" on stage, not "clowns", probably referring to what people are smoking at the concert. Grab this release and, as Robert says, Dig It.