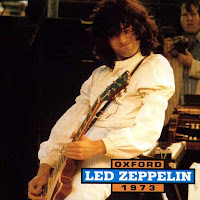 1/7/1973 Oxford, England Oxford 1973
Rock and Roll, Over the Hills and Far Away, Black Dog, Misty Mountain Hop, Since I've Been Loving You, Dancing Days, Bron-Y-Aur Stomp, The Song Remains the Same, The Rain Song, Dazed and Confused, Stairway to Heaven, Whole Lotta Love
The tape begins just as Rock and Roll crashes into motion. Plant's had a few days to rest and his voice has improved, but it's still fragile. The band ends Over the Hills and Far Away a bit early as Plant struggles to squeeze in the final verse. He apologizes for the delay caused by an iron bar being thrown onto the electric railway lines, halting train service. Black Dog is dedicated to "the guy who did that." Misty Mountain Hop is no longer dedicated to the Manchester CID "for obvious reasons" as Plant puts it. Instead, he dedicates the song to "everybody who ever got waylaid when they were going somewhere." The instrumental machinery is firing on all cylinders during Since I've Been Loving You. Page, Jones, and Bonzo are tighter than ever before.
Before Bron-Y-Aur Stomp, Plant tells the crowd that Bonzo will no longer be providing backing vocals on the song, explaining "I'm afraid the sweet wine has got the best of his voice." Bonzo is absolutely on fire during The Song Remains the Same, unleashing a thunderous stampede of drums. There is a brief cut in the middle of The Rain Song. Plant introduces Dazed and Confused as "one from a long time back, when we were all twenty in the press handouts." The lead-in to the bow solo features a hauntingly heavy San Francisco interlude. The frenzied guitar solo/workout section includes the return of the Walter's Walk theme. Page conjures up a vast array of new riffs and licks as Bonzo and Jones hold down the urgent rhythm. Bonzo's relentless pounding is like a barrage of canon fire during the Mars, the Bringer of War section. An amazing performance.
Plant introduces Stairway to Heaven as "a song that was conceived about two hours after we finished Black Dog." Whole Lotta Love is dedicated to "any of our road managers who didn't get arrested in Sheffield." Plant's microphone cuts out during the first chorus, returning with a loud screech of feedback in time for the second verse. Unfortunately, the recording ends just as Everybody Needs Somebody to Love crashes into motion.
The tape is a great soundboard recording with Plant and Bonzo out front. Unfortunately, Page gets a bit buried in the mix at times. Overall, an excellent recording for Bonzo lovers, his performance is definitely the highlight of the show.
Click here for an audio sample courtesy of Black Beauty.