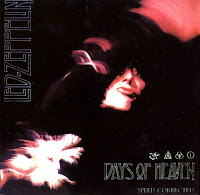 1/14/1973 Liverpool, England Days of Heaven
Over the Hills and Far Away, Black Dog, Misty Mountain Hop, Since I've Been Loving You, Dancing Days, Bron-Y-Aur Stomp, The Song Remains the Same, The Rain Song, Dazed and Confused, Stairway to Heaven, Whole Lotta Love, Heartbreaker, The Ocean
The tape begins during Page's intro of Over the Hills and Far Away. Plant is still having trouble with his voice, unable to reach the higher notes. Page shreds through the guitar solo. Bonzo's bass drum is like a cannon during Black Dog. Since I've Been Loving You is wild and loose. Plant tells the crowd "we used to do about half an hour of acoustic stuff" before Bron-Y-Aur Stomp.
Plant comments "we were really a blues group when we started, man" before introducing The Song Remains the Same as "a real blues song." There is a cut in the tape prior to the final verse of The Rain Song. A second cut shortly thereafter leaves us at the beginning of the lead-in to the bow solo in Dazed and Confused. Plant exclaims "do the James Brown!" during a funky jam prior to the San Francisco interlude. Page experiments with a number of new riffs and themes during the guitar solo/workout section, with Bonzo and Jones following close behind. Plant unleashes some blood-curdling screeches following his call and response with Page. Bonzo plays the explosive rhythm of Immigrant Song during the Mars, the Bringer of War section. As the song ends, Plant introduces "Jimmy Page!... Johnny Bonham!... John Paul Jones!"
Before Whole Lotta Love, Plant announces "and in the Liverpool evening air, screams of agony could be heard... three thousand people, all pointin' in one direction, screamin' and shoutin' and makin' funny noises." It sounds like someone is playing bongos or congas during the theramin freakout. Bonzo is like an out of control locomotive during the Everybody Needs Somebody to Love section, his relentless pounding creating a cacophonous explosion during the finale. The medley includes Boogie Chillen', which features a great new stop-start intro, Elvis Presley's (You're So Square) Baby I Don't Care, which is unfortunately cut after only one verse, Let's Have a Party, an excellent I Can't Quit You Baby, and an amazingly heavy Goin' Down Slow. Bonzo is nothing short of inspired during the extended blues improvisation. His performance is definitely a major highlight of the show.
Plant introduces Heartbreaker as "one for the M6." Page's excellent a cappella solo is followed by an earth-shaking guitar solo section. Bonzo hammers away with incredible force during the final verse. The band closes the show with a raucous rendition of The Ocean. Plant tells the crowd "it's been a very nice sunday night... see you again someday" as the band leaves the stage.
The tape is another great soundboard recording. There is a bit of hiss during the quieter moments and some distortion in the bass frequencies at times due to Jones's malfunctioning equipment. Overall, a highly enjoyable recording. It is also another excellent recording for Bonzo lovers, his powerful performance is front and center.