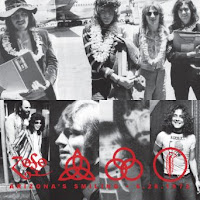 Immigrant Song, Heartbreaker, Black Dog, Over the Hills and Far Away, Since I've Been Loving You, Stairway to Heaven, Bron-Y-Aur Stomp, Dazed and Confused, What is and What Should Never Be, Dancing Days, Moby Dick, Whole Lotta Love, Rock and Roll

Immigrant Song is a devastating sonic assault. Bonzo is like a one man blitzkrieg as Page shreds through the guitar solo. The thunderous attack doesn't let up during Heartbreaker. Page's excellent a cappella solo is topped only by the frenzied explosion of the fast guitar solo section. Plant announces "today is the fifteenth birthday of Terry Hansen, so this is a song for Terry Hansen" before a brutally heavy Black Dog. He tells the crowd "this is the last gig of this tour, so we intend to have a really good time" before an excellent Over the Hills and Far Away, which is introduced as "a special treat." Page tears through the guitar solo as Bonzo and Jones hold down an urgently funky rhythm.

Since I've Been Loving You is painful and aggressively beautiful. An amazing performance. Stairway to Heaven is introduced as "a little song that came one night... when all was lost." Page plays an epic guitar solo. Plant tells the crowd "tonight's the last night, so we're gonna get so silly... sometime in the next twenty-four hours" before introducing the only acoustic song of the night, Bron-Y-Aur Stomp. Bonzo's relentless pounding is like cannon fire during the initial verses of Dazed and Confused. Page is on fire during the frantic guitar solo/workout section. The four of them are locked into each other, playing as one well-oiled machine during the epic improvisation. A truly mind-blowing performance, one of the best thus far.

Moby Dick is outstanding. There are some disturbing speed fluctuations during Whole Lotta Love, which add an interesting new dimension to Page's theramin trickery. The riotous medley includes Boogie Chillen', featuring an excellent guitar solo from Page, a fantastic rendition of Elvis Presley's Let's Have a Party, a raucous Stuck on You, Hello Mary Lou, and an incredible Goin' Down Slow, which includes a great keyboard solo from Jones. Plant announces "Arizona's smiling!" and jokingly sings a bit of When You're Smiling before the band closes the show with a high-energy Rock and Roll. Page starts the guitar solo late, causing a bit of confusion until he catches up with himself. As the band leaves the stage, Plant says "thank you very much... next year." A phenomenal end to the legendary 1972 American tour. Must hear.

The tape is clear and well-balanced, if a bit overloaded and lacking in bottom end.

About three minutes of silent color footage is available on Hercules's Film Noir Vol. 1. Unfortunately, the footage, consisting of various short fragments from the show, is distant, blurry, and quite washed-out.

Click here for a video sample courtesy of Black Beauty.

Incredible show, your review was spot on!!!

This is yet another great show from the '72 US tour! SIBLY is awesome and Stairway, Dazed & Confused and Whole Lotta love are all great! An awesome end to a great tour!

One of the greatest EVER!

Knocks HTWWW into a cocked hat.
Everyone should give it a spin ASAP

are there songs missing from the acoustic set ,or did they just play a shorter show following the marathons that proceded it thanks

This is the last ever performance of WIAWSNB What an awesome show!!! Thanks for your review!!! ON POINT!

are there songs missing from the acoustic set ,or did they just play a shorter show following the marathons that proceded it thanks"

We were having a pretty good time too that night so details are a bit fuzzy but I remember the crew bringing out two stools and two acoustic guitars. Page and Plant sat down to play and may have gotten through part of a song when the crowd started chanting Rock and Roll enough to interrupt the set. One of the two stood up and said something like You want Rock and Roll, we'll give you Rock and Roll and the crew reset the stage and they came out and proceeded to do just that for the rest of the night. I think I lost some of my hearing that night, LOL.