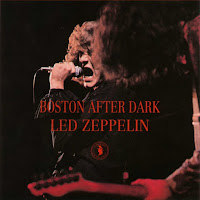 1/23/1969 Boston, MA  Boston After Dark
Train Kept a Rollin', I Can't Quit You Baby, As Long as I Have You, Dazed and Confused, You Shook Me
Plant mentions that, according to Page, Boston is "the best place he's ever played" and it shows. The vibe is very loose, but full of excitement and energy. The band pauses after Train Kept a Rollin' while Page fixes a broken string. Plant uses this time to promote the first album and complain about a strange sound coming from his microphone. Every high note Plant hits during the intro to I Can't Quit You Baby is met with a squeal of feedback, prompting laughter from the crowd and Plant.
Every member of the band is in good form, giving a raucous performance of As Long as I Have You. Plant has his voice back and is pushing it to the limit, filling every corner with squeals and shouts. Bonzo attacks his drums relentlessly during the extended guitar solo, then pulls back for a duel with Page. Plant tries to bring them back into the final verse, but he has to repeat "born in darkness" three times before they follow.
Plant introduces Dazed and Confused as "a thing that was written by the crew." Jones is the foundation holding everything together while everyone else goes wild. Someone in the crowd requests White Summer before the band launches into an inspired version of You Shook Me. Unfortunately, the tape ends here. I bet the rest of the show was just as exciting as the first bit.
The tape is very clear with all instruments evenly balanced for the most part. There is what sounds like a damaged section of tape during I Can't Quit You Baby, but it recovers quickly. A very enjoyable document of the band's first night in Boston.
Click here for an audio sample courtesy of Black Beauty.

1969-01-23 Boston Tea Party, Boston, MA, "Boston After Dark" (EVSD)
MUCH better sounding than yesterday's selection, night and day, but even so, this is just an average audience recording, that's how bad the one yesterday was, heh. Show starts with The Train Kept A Rollin', Plant tries to kill some time before I Can't Quit You Baby while Page changes a guitar string. There is some serious tape crunch but then things clear up. The show continues with As Long As I Have You, Dazed and Confused and finishes with You Shook Me. Enjoyable show to listen to. Listened to this while raking the front yard ... IN JANUARY!?!