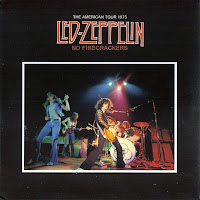 7/18/1973 Vancouver, British Columbia  No Firecrackers
Rock and Roll, Celebration Day, Black Dog, Over the Hills and Far Away, Misty Mountain Hop, Since I've Been Loving You, No Quarter, Dazed and Confused, Stairway to Heaven
Plant's voice starts out a bit rough, taking a few songs to really warm up. Jones's fingers fly across the fretboard during a frantic Celebration Day. As the song ends, the tape fades to a cut just as the Bring it on Home intro to Black Dog begins. We return during Plant's call and response with the crowd. Page blazes through the guitar solo during Over the Hills and Far Away. Before Misty Mountain Hop, Plant tells the crowd "we really must try and maintain some seriousness about this, although we always try and give out a vibe where everybody's smilin'... we should play our balls off if you promise no firecrackers." Since I've Been Loving You is absolutely fantastic. One of the best performances in recent memory.
The band is on fire during another outstanding No Quarter. The Song Remains the Same and The Rain Song are missing from the tape. Page solos wildly through the lead-in to the bow solo during Dazed and Confused. There is a cut in the tape during the call and response with Bonzo and Jones, which leaves us at the beginning of the bow solo. The frenzied guitar solo/workout section is interrupted by a commotion in the crowd, prompting Plant to repeatedly call out "take it easy!" The outro is a wild race to the finish. An excellent performance. As the song ends, one of the tapers can be heard commenting on Page's performance in particular, saying "he's really playing quite well this evening."
Stairway to Heaven is introduced as "somethin' a little easier, cooler." There is a slight cut during the initial verses. Page delivers another excellent guitar solo. As the song ends, Plant says "thank you and goodnight" as the band unexpectedly leaves the stage. Soon after, someone onstage announces "ladies and gentlemen, Led Zeppelin has left the building... we're trying to get Robert Plant to a hospital, will you please very orderly try and cool it with the traffic while we're trying to get the limos through the traffic, we have to get Robert to a hospital in the next few minutes" adding "thank you very much, they said to thank you, you've been an unbelievable audience." Someone near the taper can be heard shouting "what's this bullshit?!" just before the recording ends.
The tape is fairly clear, if a bit hissy.