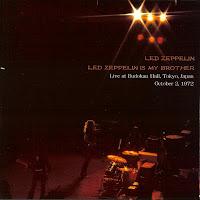 10/2/1972 Tokyo, Japan  Led Zeppelin is My Brother
Rock and Roll, Over the Hills and Far Away, Black Dog, Misty Mountain Hop, Since I've Been Loving You, Dancing Days, Bron-Y-Aur Stomp, The Song Remains the Same, The Rain Song, Dazed and Confused, Stairway to Heaven, Whole Lotta Love, Heartbreaker, Immigrant Song, Communication Breakdown
The first show of Led Zeppelin's second and final tour of Japan begins with a brief introduction by Goro Itoi. The premiere of the newly revamped setlist kicks off with the first appearance of Rock and Roll as the opening number. Plant is almost nonexistent during the initial verses, his voice breaking with every note he tries to hit. Page's fingers get a bit sticky during the guitar solo. During the intro of Over the Hills and Far Away, Page hits a bum note, throwing himself off a bit. Plant is having a lot of trouble with his voice, unable to hit the high notes like he used to.
Black Dog is followed by the first appearance of Misty Mountain Hop since 5/3/1971. Bonzo is in top form, throwing in inventive fills at every turn. The new arrangement of Since I've Been Loving You is highly dramatic. Page's soloing is flawless. Plant introduces Bron-Y-Aur Stomp by imitating a dog for the non-english-speaking crowd, saying "this song about a *woof woof*." He tells the crowd "Jimmy Page no use Greco, Jimmy Page use Gibson" as Page tunes his acoustic guitar. Before the first appearance of The Song Remains the Same, Plant explains "at the moment, we ain't got no title for it... we'll just call it Zep." An excellent performance with Bonzo wailing on his new tympani. The premiere of The Rain Song is absolutely beautiful and features Jones's newly-acquired Mellotron.
Page retunes his guitar during the intro of Dazed and Confused. Bonzo is out of control, thrashing at anything within reach as Page solos wildly during the guitar solo/workout section. Plant's introduction of Stairway to Heaven draws a loud cheer from the crowd. The guitar solo is drenched in echo. Whole Lotta Love is introduced as "one that really got us here... hope it'll get us back." The Everybody Needs Somebody to Love section is a cacophonous explosion. The medley begins with a mellow call and response between Plant and the crowd before Boogie Chillen', Elvis Presley's My Baby Left Me, the first appearance of Killing Floor since 9/6/1971, as well as an excellent new arrangement of I Can't Quit You Baby in it's first appearance since 12/2/1971. Page blazes through his solos during Heartbreaker. Plant's voice returns at full force during Immigrant Song, his Valhalla cries echoing through the hall. The show ends with a lightning-fast Communication Breakdown.
The tape is excellent, very clear and atmospheric. It gives the feeling of being in the crowd.
Click here for audio samples courtesy of Black Beauty.

Plant sounds pretty rough for the first 5 songs or so, then he settles in and sounds much like he did throughout the summer '72 tour. The rest of the show is phenomenal and the whole band sounds great!

In my opinion, on a par with the Millard recordings. A rusty performance, but with more than enough highlights to make this one a must hear.
Crystal clear

50 years ago today we had the debut of TSRTS and TRS. .