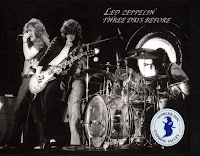 5/28/1973 San Diego, CA  Three Days Before
Rock and Roll, Celebration Day, Black Dog, Over the Hills and Far Away, Misty Mountain Hop, Since I've Been Loving You, No Quarter, The Song Remains the Same, The Rain Song, Dazed and Confused, Moby Dick, Stairway to Heaven, Heartbreaker, Whole Lotta Love, The Ocean
Celebration Day is cut short when Page launches into the guitar solo before the band has a chance to play the second chorus. Plant asks the people in the front of the crowd to be cool before introducing Over the Hills and Far Away as "(a song) about every man and every woman" joking "and it's not called an orgy." Following a cut during the intro, the initial verses of No Quarter are missing from the tape. Bonzo and Jones provide an excellent jazzy foundation for Page's sticky-fingered guitar solo. Jones even throws in a few bars of Your Time is Gonna Come near the end. As the song ends, Plant announces "that was John Paul Jones playing weird piano." Unfortunately, all but the final fifty seconds of Dazed and Confused is missing from the tape.
Plant tells the crowd that a piece of Page's guitar has gone missing, so the band skips Stairway to Heaven for the time being and resumes with Moby Dick after a cut in the tape. Page is absent from the mix for most of the intro. There are a few slight cuts during the effects-heavy tympani section of the drums solo. Page's guitar solo during Heartbreaker is a burst of sticky-fingered inspiration. Bonzo and Jones get into a bit of The Crunge at the end of the theramin freakout during Whole Lotta Love. The excellent, high-energy Boogie Chillen' section is preceded by impromptu renditions of Muddy Waters's Honey Bee and Don Nix's Going Down. As the band returns to the stage, Plant tells the crowd "whoever threw that firecracker deserves to be jerked-off by an elephant." The show ends with a somewhat uneven The Ocean.
The tape is yet another excellent soundboard recording.
Click here for audio samples courtesy of Black Beauty.

Great show but a bummer about NQ and DAC. . Is there anywhere to find the complete version???