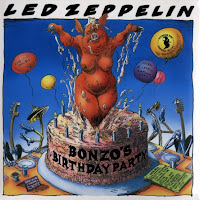 5/31/1973 Los Angeles, CA  Bonzo's Birthday Party
Rock and Roll^, Celebration Day*, Black Dog*, Over the Hills and Far Away*, Misty Mountain Hop*, Since I've Been Loving You*, No Quarter*, The Song Remains the Same*, The Rain Song*, Dazed and Confused*, Stairway to Heaven*, Moby Dick^, Heartbreaker^, Whole Lotta Love^, The Ocean^, Communication Breakdown^
*- soundboard: Bonzo's Birthday Party (Watch Tower)
^- audience: Bonzo's Birthday Party (EVSD)
The celebration of Bonzo's twenty-fifth birthday gets off to an explosive start as the high-energy rampage of Rock and Roll crashes into motion. The band is on fire during the brutal attack of Celebration Day. Following Over the Hills and Far Away, Plant announces "we'll call this gig Bonzo's Birthday Party." Since I've Been Loving You is highly dramatic and incredibly powerful. An excellent performance. The instrumental section during No Quarter is fantastic. As the song ends, Plant announces "John Paul Jones played the piano... and somebody else fucked up the monitors."
Page blazes through the guitar solos as Jones's fingers dance across the fretboard during The Song Remains the Same. The Rain Song is absolutely beautiful. Plant introduces Dazed and Confused as "a far out heavy trip." Page shreds through the frantic lead-in to the bow solo. The San Francisco interlude is both eerily haunting and devastatingly heavy. The guitar solo/workout section is an epic journey, culminating in a explosive return to the main riff. Plant dedicates Stairway to Heaven to Bonzo before threatening someone off-mic, saying "get that fuckin' monitor down or I'll fuckin' come and kill ya." Page delivers an excellent guitar solo. The final verse sees Plant pushing his voice to the limit.
Plant introduces Moby Dick by saying "considerin' it's the gentleman's birthday, I think it's only fair that we should let him bang his balls out." There are a few cuts throughout the drum solo. As the song ends, the band plays Happy Birthday for Bonzo. Heartbreaker is excellent. The Boogie Chillen' section during Whole Lotta Love features a flawless guitar solo from Page. As the band returns to the stage, Plant tells the crowd "Jimmy sprained his finger two days ago... and he's been playing tonight and puttin' his hand in a bowl of cold water to keep the swelling down, so I think that's great" before introducing a high-energy The Ocean as "a thing about you." The show ends with a raucous Communication Breakdown. A fantastic performance. Must hear.
The soundboard tape is excellent, although not quite as clear as some of the other soundboard recordings from this tour. The audience tape is clear and well-balanced, if a bit noisy on the high end.
Click here and here for audio samples courtesy of Black Beauty.
About three and a half minutes of black and white footage from the show exists. The film, shot from very close to the stage, includes brief clips of Celebration Day, Over the Hills and Far Away, No Quarter, The Song Remains the Same, and Dazed and Confused. The picture is very high contrast, causing a loss of detail, but is still quite enjoyable.

This is yet another great soundboard recording from the '73 tour. The major problem with the '73 tour was Plant's injured voice, but He generally sounds OK here (much better than earlier in the year). Still, this show is excellent and the tandem of TSRTS and rain song is fantastic, as are celebration day and D&C. Great atmosphere as well!

I have the first part of this show. . Is there a second part after The Rain Song??