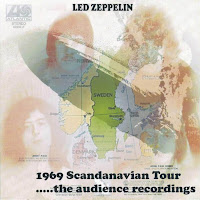 Train Kept a Rollin'*, I Gotta Move, I Can't Quit You Baby, Dazed and Confused, White Summer/Black Mountain Side*, How Many More Times*
*- audience source only

The audience tape begins with a lengthy introduction of the band. The levels fluctuate wildly during Train Kept a Rollin'. Plant, Jones, and Bonzo play an excellent bluesy jam, in which Jones shows off his chops, while Page changes a broken string. Bonzo loses the snares from his snare drum during I Can't Quit You Baby.

It sounds as if the band is about to play Communication Breakdown right after the bow solo in Dazed and Confused. There's something wrong with Page's equipment near the end of the song, causing his guitar to drop out for the last verse. How Many More Times includes an extended jam/guitar solo, but the band seems to get lost a few times. The audience tape ends with another lengthy stage announcement.

The soundboard tape is a great, if a bit bass-heavy, broadcast master. The audience tape is terribly hissy and muffled. What a contrast.

1969-03-16 Copenhagen, Denmark AUD "In The Garden of Sweden" (Beelzebub)
Hissy, muffled, low quality, at times it's hard to believe that you might be listening to Led Zeppelin. Really hard to even have much of an opinion of any of the songs. Things are marginally better later on, to the point where you can somewhat listen along. White Summer, which isn't included in the better source, sounds like Page was probably on fire - but it's hard to know for sure (: It's a shame it wasn't better quality. About 55 minutes long

1969-03-16, Copenhagen, Denmark "Stockholm 1969" (Kaleidoscopeic Music)
As the title of this bootleg shows, there is *still* some confusion on the date and location of this show, it is generally accepted to be Copenhagen on 3/16, so I'll go along with that. There is apparently better sources of this out there that I might need to go looking for, mine isn't the greatest. About 22 minutes long, 'soundboard', though not sure of the lineage for this bootleg. Stryder rates this bootleg as being a '9' but that seems awfully generous. With all that said, this clip is far and away better than the audience source, but sadly not complete.

Official site dates this as 03/14/69 Stockholm. I'm inclined to agree per the 2 newspaper writeups. Also, my aud tape dated 03/16 doesn't match up with the soundboard.