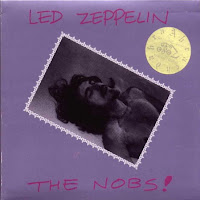 2/28/1970 Copenhagen, Denmark  The Nobs!
Dazed and Confused, Heartbreaker, White Summer/Black Mountain Side, Since I've Been Loving You, Thank You, Moby Dick, How Many More Times, Whole Lotta Love, Communication Breakdown, C'mon Everybody, Something Else, Bring it on Home, Long Tall Sally

The tape starts just as Dazed and Confused is beginning, Plant adopts a delta blues drawl during the third verse. The crowd rhythmically claps along to Page's string slapping during the bow solo. Bonzo sounds like an earthquake during the guitar solo, the return to the main descending riff is absolutely devastating. Page's intro to Heartbreaker is explosive and angry. Bonzo's thunderous pounding is unrelenting. Page shreds wildly through the guitar solo. A very heavy and powerful rendition.

The crowd's incessant rhythmic clapping between songs is overwhelming. White Summer/Black Mountain Side is repeatedly interrupted by a man in the crowd talking loudly very close to the taper. Bonzo thrashes his way through Thank You, destroying the delicate facade. The beginning of How Many More Times is a wild ruckus. Plant gets into the "oh baby, pretty baby" chant he'll later use for Black Dog during the intro to the medley. Communication Breakdown features a funky bass solo from Jones during the breakdown. Plant comes in early at the beginning of the song, repeating the first line to right himself after Bonzo crashes into action. The crowd's rhythmic clapping works to the band's advantage during Bring it on Home, Page even gets into a call and response duel with them during the guitar solo. The show ends with a raucous Long Tall Sally, with Bonzo destroying anything within reach. A riotous performance.

The tape is fairly clear, if a bit distant.
Click here for an audio sample courtesy of Black Beauty.

1970-02-28, Copenhagen, Denmark "The Nobs!" (Tarantura)
Listened to this while on my long run. Tape is fairly clear but somewhat distant. At times, especially during White Summer, there is a lot of talking around the recorder. Tape misses the start of the show, beginning with Dazed and Confused. They next run thru Heartbreaker, White Summer, Since I've Been Loving You, Thank You and Moby Dick. Then they play How Many More Times, before the encores of Whole Lotta Love, Communication Breakdown, C'mon Everybody, Something Else, Bring It On Home and Long Tall Sally. Sounded like a good performance, but the quality of the recording makes it unlikely to be listened to again.

I think this marks the first appearance of phrases from Swan Song (which became The Firm track Midnight Moonlight).