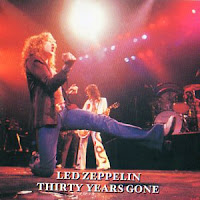 The Song Remains the Same, Sick Again, Nobody's Fault But Mine, In My Time of Dying, Since I've Been Loving You, No Quarter, Ten Years Gone, The Battle of Evermore, Going to California, Black Country Woman, Bron-Y-Aur Stomp, White Summer/Black Mountain Side, Kashmir, Over the Top, Over the Hills and Far Away, Achilles Last Stand, Stairway to Heaven, Rock and Roll

The band's second night in LA and the frenzy has not let up. Bonzo thrashes wildly at his drums as Page shreds erratically through a frantic The Song Remains the Same. The combined sonic assault threatens to destroy the taper's equipment. Plant barks aggressively as the band pummels the crowd with another brutal Sick Again. As the song ends, Plant exclaims "give it a rest!" in response to a series of firecracker blasts, insisting "leave it out, we don't want that!" The band hammers through a bone-crushing In My Time of Dying, even getting into an impromptu lemon-squeezing interlude following the You Shook Me tease. As the song ends, Plant tells the crowd "I lay awake til dawn this mornin', thinkin' about lemons... and the lack of squeezers."

Since I've Been Loving You is incredibly raw and powerful. No Quarter is an epic journey. Jones's piano solo gives way to an excellent blues rock jam before Page embarks on a long, wandering guitar solo. He shreds wildly during the song's outro. An otherwise beautiful Going to California is interrupted by someone near the taper shouting "fuck all you pigs!" very close to the microphone. Page breaks a string during Bron-Y-Aur Stomp, leaving Jones to improvise a short bass solo. The song's momentum is disrupted briefly as Page pauses to tune the guitar upon his return. The crowd erupts as the band launches into a devastating Kashmir. Plant's aggressive howls echo through the arena as the band hammers through the thunderous march.

Bonzo is introduced as "the more peace-loving, placid member of the band" before Over the Top. The first mention of the mysterious Badge Holders comes as Plant calls Bonzo "a friend of a diamond-studded Badge Holder" as the drum solo comes to a close. The biggest surprise of the night is the inclusion of Over the Hills and Far Away so late in the set. Plant has returned to the more manageable post-1972 melody for the chorus. Page blazes through a spaced-out guitar solo. Achilles Last Stand is a frantic explosion of energy. Bonzo pummels his drums with incredible power and intensity as Page tears through the guitar solos. Stairway to Heaven features an outstanding guitar solo. As the song ends, Plant announces "that's about three hours and ten minutes, love ya, goodnight!" The band closes the show with a wildly cacophonous Rock and Roll. Another devastating performance at The Forum.

The tape is a combination of five sources. The first, used through Since I've Been Loving You, is noisy and overloaded. The second, inexplicably used only for the final note of Since I've Been Loving You and the initial verses of No Quarter, is very clear and well-balanced. The third, used for the remainder of No Quarter, is fairly clear, but extremely hissy. The fourth, used for Ten Years Gone (available here for the first time), is very muffled and distorted. The fifth, used for the remainder of the show, is fairly clear and well-balanced, if a bit distant and noisy in the high end.

This show has the misfortune of being
b/ween 6/21 and 6/23. Thanks to the five source mix. we are able to finally hear it in its entirety. Question that I have is did Mike Millard tape this show as well?

Probably, he could've recorded just about every forum show in 77', but who knows if he ever traded it or the tape was destroyed somehow.

The biggest question however is if source 2 could be complete or is it all that exist, who knows what could have been hoarded....

If I had to pick the best show from 1977 on a pure performance level, I'd pick this show. It has unfortunately been overlooked, as Unklejimbo said, due to it being sandwiched between two of the most famous Zeppelin bootlegs of all time (Listen to This Eddie and For Badgeholders Only).

Despite the inconsistent and inferior sound quality, the performance combines the tightness and energy of 6/21 with the looseness and confidence of 6/23. It's the only show of 77 where BOTH IMTOD and OTHAFA were performed (and I honestly believe both versions here are definitive) and contains the longest No Quarter ever (love the rock jam in the middle). Add to that an amazing drum solo (probably the best of the whole tour, and yes I'm including Keith Moon's guest appearance the next night), a BRUTAL Achilles Last Stand (not even Page breaking a string in the middle disrupts the thunderous attack), and a unique version of Stairway (notice how Page goes straight into the solo instead of repeating the fanfare), and you've got a top 10 show for sure.

Every song is performed pretty much flawlessly. Bonham is on fire and pounding him drums relentlessly WITHOUT overplaying like he did the previous night, Jones is his usual great self, and Page and Plant are in as good shape as they would ever be for that year. Don't let the mediocre sound quality turn you off. While the entire LA run is great, this is the best show of the six as far as I'm concerned. Please God have a soundboard for it pop up one day!