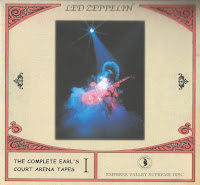 5/17/1975 London, England
Demand Unprecedented in the History of Rock Music
Rock and Roll, Sick Again, Over the Hills and Far Away, In My Time of Dying. The Song Remains the Same, The Rain Song, Kashmir, No Quarter, Tangerine, Going to California, That's the Way, Bron-Y-Aur Stomp, Trampled Underfoot, Moby Dick, Dazed and Confused, Stairway to Heaven, Whole Lotta Love, Black Dog
The first show of the band's legendary five-night stand at Earls Court begins with a brief introduction by DJ Bob Harris welcoming them back to Britain before Rock and Roll crashes into motion. The equipment issues are evident from the start with Page's guitar cutting in and out during the initial verses. He blazes through the second guitar solo in Sick Again. As the song ends, Plant comments "you wouldn't believe that after all the trouble and messin' about to try and get this unearthly monster with us, the first thing that gets blown, right?" He introduces In My Time of Dying as "an old chain gang thing" before dedicating the song to Chancellor of the Exchequer Denis Healey. An incredibly powerful performance, Page solos wildly as Bonzo's thunderous pounding echoes throughout the cavernous arena.
The Song Remains the Same is a riotous explosion of energy. As Kashmir comes to a close, someone near the taper can be heard saying "that's what I've been waiting for." Jones is introduced as "master of keyboards" before No Quarter. The instrumental section has returned to its original heavy rhythm, abandoning the free-form jazz workouts of the west coast shows two months prior. The coda features some excellent soloing from Page. Tangerine is introduced as "a song of first love." Its first appearance since 6/27/1972, the song is performed in a new electric arrangement. As the song ends, Plant tells the crowd "that's the first time that there's ever been such a thing as four-part harmony on stage with Led Zeppelin."
The first appearance of the acoustic set since the end of the 1972 North American tour begins with Going to California. That's the Way is delicately beautiful. Plant explains to the crowd that he's forgotten the words to some of the older songs, so he's brought along lyric sheets to help him remember before Bron-Y-Aur Stomp. Page shreds through the guitar solo during Trampled Underfoot. Bonzo is introduced as "a man of character, of good karma... Mr. Vibes extraordinaire" before Moby Dick. Plant introduces Dazed and Confused as "the first thing that we ever played together," adding "and at the end of the first attempt at playing it, we realized that despite efforts by the Melody Maker to break us up, we should carry on forever." While not as ambitious and over the top as the west coast marathons, the band delivers a high-energy performance during the guitar solo/workout section. The frenzied outro jam is punctuated by a thunderous finale. Stairway to Heaven features an epic guitar solo. The band closes the show with a devastatingly heavy Black Dog.
The tape is fairly clear, if a bit distant and cacophonous due to the acoustics of the arena.