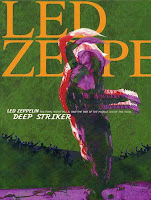 6/27/1977 Los Angeles, CA  Deep Striker
The Song Remains the Same, Sick Again, Nobody's Fault But Mine, Over the Hills and Far Away, Since I've Been Loving You, No Quarter, Ten Years Gone, The Battle of Evermore, Going to California, Black Country Woman, Bron-Y-Aur Stomp, White Summer/Black Mountain Side, Kashmir, Trampled underfoot, Over the Top, Achilles Last Stand, Stairway to Heaven, Rock and Roll
The band returns for their sixth and final night at The Forum and it's obvious that the frenzy of the first few LA shows is wearing thin. Page's fingers get stuck in the strings during The Song Remains the Same and Plant's voice takes a few songs to really warm up. The band flirts with disaster during an incredibly loose Sick Again, constantly on the edge of falling apart. As the song ends, Plant tells the crowd "we're gonna do our best to play... until we fall over." Page adds a beautiful prologue to the beginning of Over the Hills and Far Away. He shreds erratically through an extended guitar solo. Plant introduces Since I've Been Loving You, which is dedicated to J.J. Jackson, as "a song about a little bit of distress in a relationship."
Jones is introduced as "the man who went to sleep last night with... some strawberry tart in the pocket of his jeans" before No Quarter. The instrumental section begins with an ominous electric piano interlude, punctuated by a shrieking chorus of theramin squeals. Jones's piano solo develops into an excellent blues improvisation as Page and Bonzo join in. Page's fingers are like razor blades as he slashes and shreds through a long, wandering guitar solo. Jones erupts in a furious cascade of notes as the piece nears its conclusion. Page stumbles through a lackluster Ten Years Gone, unable to find his footing during the guitar solos. The Battle of Evermore is introduced as "a song that's very reminiscent of somewhere we're gonna be in about twenty-four hours time." Plant dedicates Going to California to "every Californian Badge Holder we've ever had." The band gets into a brief rendition of Muddy Waters's I Can't Be Satisfied prior to Black Country Woman. Page breaks a string in the middle of Bron-Y-Aur Stomp, which features an abbreviated acoustic performance of Dancing Days during the guitar breakdown.
The crowd erupts as Kashmir launches into motion. The band hammers through an erratic Trampled Underfoot. Page embarks on another endless experimental guitar solo following Over the Top, obsessively repeating the theme from America during the electronic noise section. The band is incredibly loose during Achilles Last Stand, almost to a fault. Bonzo's performance is particularly unpredictable. There is a cleverly disguised cut in the middle of the song. Plant announces "it's been great, six days, six concerts in LA... it's been a mind-bender" before Stairway to Heaven. Page fumbles through a choppy, disjointed guitar solo. Plant takes time to thank a number of people, including "the Badge Holders of California" before a violently aggressive Whole Lotta Love. The band closes the show with a riotous Rock and Roll. An explosive finale to the band's final performance in the city that has become their second home.
The tape is the tenth and final Mike Millard recording. Very clear and well-balanced, if a bit hissy during the quieter moments.
Click here for an audio sample courtesy of Black Beauty.

I like the acoustic set in this show. That said, they seem pretty tired for most of the rest of the show, and I'd say this is the worst of the LA 77 concerts, overall.

With the exception of the 'noise solo' this whole concert is a keeper. I usually skip over the drum solo, but it was so good I had to hear it twice. Not a weak number in the bunch. Sure Page has to tune in the middle of Bron-Yr-Stomp but that comes with the territory. My source for this recording is the "dadgad" remaster.

Jonesy performs a Boogie-woogie piano during the piano solo section and also during the blues jam section too.

I've always loved this show. Sure, it's not always as tight as the other five L.A. shows, but it has a unique vibe to it, and has a lot of highlights, particularly a fantastic "No Quarter" (the second-longest ever, behind 6/22/77) and one of their better acoustic sets. I also noticed for the first time today how good Page's first solo in "Achilles Last Stand" is!

After listening to this show more over the years, I think it's better than what I originally implied. They only seem tired in some portions of the non-acoustic songs. I agree that the main drawback of the show is its being a little sloppy here and there. It's a good show. One could even make a case that the 27th is better than the 22nd. The 27th sounds less forced/showy and over-the-top (no pun intended) and feels more organic. Robert's voice is more worn than on the other LA nights, but still quite clear and enjoyable compared to most non-California 1977 shows. Bonzo has noticeably less energy and doesn't do as many of his horse-powered frenetic fills of the earlier nights, but he makes up for this by experimenting with complex and interesting drum rhythms, which gives infuses the performance with a progressive rock feel at times.