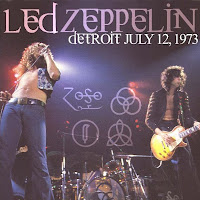 7/12/1973 Detroit, MI  (master>vhs>dat>cdr)
Rock and Roll, Celebration Day, Black Dog, Over the Hills and Far Away, Misty Mountain Hop, Since I've Been Loving You, No Quarter, The Song Remains the Same, The Rain Song, Dazed and Confused, Stairway to Heaven, Moby Dick, Heartbreaker, Whole Lotta Love, Communication Breakdown, The Ocean
The tape begins during the final minute of Rock and Roll. Plant's voice starts out a bit rough, taking a few songs to warm up. Following a request that the crowd stop throwing firecrackers, Plant dedicates Misty Mountain Hop to "the loss of brain cells."  Since I've Been Loving You is elegantly restrained. The instrumental section during No Quarter is fantastic. Unfortunately, there are a few brief dropouts near the end of Page's guitar solo. The taper can be heard fiddling with his equipment during the first verse of The Rain Song.
Page solos wildly during the lead-in to the bow solo in Dazed and Confused. The band is on fire during the frantic guitar solo/workout section. There is a cut in the tape during Page's call and response with Plant. Page's fingers dance across the fretboard during the guitar solo in Stairway to Heaven. Plant introduces Moby Dick as "a number that receives great popularity and ovations almost everywhere cause it's sheer... intense... beauty." Unfortunately, the majority of the drum solo is missing from the tape, leaving us with only the intro/outro and a few fragments in between. As Bonzo is taking his final solo break at the end of the song, the taper can be heard saying "this is boring" before commenting to one of his friends "look, the guitarist and bass player look bored to death."
Plant can be heard whistling along as Page hints at The 59th Street Bridge Song at the end of the a cappella solo during Heartbreaker. Page absolutely shreds through the fast guitar solo. Bonzo and Jones hold down a frantic stop-start rhythm as Page's theramin squeals in ecstasy during Whole Lotta Love. Plant's boogie rap gives way to another excellent rendition of Don Nix's Going Down. Bonzo thrashes wildly at his drums as Page blazes through the guitar solo during the Boogie Chillen' section. As the band returns to the stage, Bonzo announces "as you know, I've never sung a note... but on this track, I'm allowed to shout!" before counting in to the show-closing The Ocean. The obnoxious taper can be heard providing off-key backing vocals throughout the song.
The tape is fairly clear, if a bit muffled and noisy in the high end, with Page slightly buried in the mix at times.

Dazed and Confused is a highlight of this show for me. Creative guitar work by Jimmy on this track and on some others.

By the way, I think it's JPJ who makes that comment before the Ocean, not Bonzo.