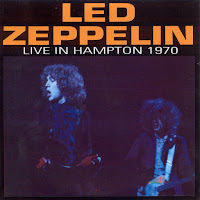 8/17/1970 Hampton, VA  Live in Hampton 1970
Immigrant Song, Heartbreaker, Dazed and Confused, Bring it on Home, That's the Way, Bron-Yr-Aur, Since I've Been Loving You, Thank You, What is and What Should Never Be, Moby Dick, Whole Lotta Love, Communication Breakdown
The tape begins with the taper asking his friends for the time as the band does a brief soundcheck before launching into Immigrant Song, which is almost a carbon copy of the version on Led Zeppelin III. Page's soloing is rather subdued during Dazed and Confused, preferring long sustained notes and simple patterns over the usual acrobatics. There are some tape disturbances that effect the stereo separation during Bring it on Home.
The acoustic set is expanding as the first appearance of Bron-Yr-Aur replaces White Summer/Black Mountain Side as Page's solo showcase. More tape issues all but destroy Page's delicate intro to Since I've Been Loving You. Jones's ever-expanding organ solo is no longer a mere intro to Thank You, but is quickly becoming its own complex entity. The unfortunate tape disturbances continue throughout Thank You, particularly during the guitar solo. The tape is cut during the medley in Whole Lotta Love as the band is playing a slow blues "feel so good" jam. The band is quite subdued, a far cry from the usual boogie explosion. The sound deteriorates considerably as they return for Communication Breakdown, which again features Good Times Bad Times following the bass solo.
The recording is a bit distant and muffled with many tape issues throughout the show.
Click here for an audio sample courtesy of Black Beauty.

1970-08-17, Hampton Roads Coliseum, Hampton, VA "Hampton 1970" (TDOLZ)
Another thin sounding show, with the bass overloading things a bit, and lacking any dynamic range. Show starts with Immigrant Song, and then moves into Heartbreaker. A woman's voice can be heard several times, it seems to be cutting right thru any other music and noise. She finally goes away during Dazed and Confused, but the tape remains fairly rough. Bring It On Home and That's The Way are next, followed by an early arrangement of Bron-Yr-Aur. The tape is very soft at this time, and it's hard to hear much. Since I've Been Loving You is next, which starts off with some severe tape issues, which clear up though. An Organ Solo and Thank You are next, with tape issues coming back during Thank You. What Is and What Should Never Be is next, followed by Moby Dick. Whole Lotta Love and then an encore of Communication Breakdown finish up the show. The chatty woman is back in force. Overall the recording is distant, bass heavy, with little dynamic range. But at least it's mostly there, not too many tape cuts compared to yesterdays offering.