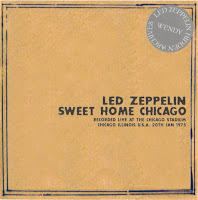 1/20/1975 Chicago, IL  Sweet Home Chicago
Rock and Roll, Sick Again, Over the Hills and Far Away, When the Levee Breaks, In My Time of Dying, The Song Remains the Same, The Rain Song, Kashmir, The Wanton Song, No Quarter, Trampled Underfoot, Moby Dick, How Many More Times, Stairway to Heaven, Black Dog, Communication Breakdown
The tape begins as someone onstage announces "ladies and gentlemen, the American return of Led Zeppelin!" Plant has the flu and it shows, his voice is reduced to an injured monotone. Page blazes through the guitar solo during Over the Hills and Far Away. The second and final appearance of When the Levee Breaks shows marked improvement on the performance in Brussels a week earlier. Plant makes mention of Page's broken finger following In My Time of Dying, joking "it must be for our sins."
Bonzo and Jones deliver a solid performance of The Wanton Song, despite their bandmates' hindrances. Trampled Underfoot is introduced as "a song for a guy who works at a gas station." Page shreds through an erratic guitar solo. Moby Dick is followed by the first appearance of How Many More Times since 1/22/1973, which includes the Dazed and Confused bow solo dropped in the middle. As the song ends, Plant announces "that was for the old folks!" The Out on the Tiles intro to Black Dog is devastatingly heavy. The band closes the show with a high-energy Communication Breakdown. Bonzo and Jones stop playing for a moment during the guitar solo, leaving Page to shred furiously a cappella.
The tape is distant and noisy.