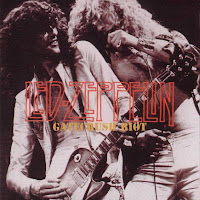 4/19/1977 Cincinnati, OH  Gatecrash Riot
The Song Remains the Same, Sick Again, Nobody's Fault But Mine, Since I've Been Loving You, No Quarter, Ten Years Gone, The Battle of Evermore, Going to California, Black Country Woman, Bron-Y-Aur Stomp, White Summer/Black Mountain Side, Kashmir
The tape begins with a brief introduction by the tapers before the band takes the stage. Things get off to a shaky start with Page struggling to find his footing during the opening numbers. He completely destroys the first guitar solo in Sick Again. As the song ends, Plant asks the crowd to "try and just keep it cool, stand still okay?" Page shreds wildly through the guitar solo in Nobody's Fault But Mine. His fingers get stuck in the strings throughout Since I've Been Loving You.
Someone near the taper can be heard commenting on the fog engulfing the stage as No Quarter begins. Jones's dramatic piano solo in introduced by a series of ghostly moans from the theramin over the thunderous rumbling of Bonzo's tympani. The upbeat interlude continues to expand, tonight featuring an outstanding hard rock workout. Page delivers an excellent guitar solo. The return to the main theme is met with a hail of firecracker blasts. A fantastic performance. There is a slight cut near the end of Ten Years Gone.
The Battle of Evermore is introduced as "a story that reflects an evening about six or seven hundred years ago." Plant asks the crowd to "cool it with the firecrackers" before a beautiful Going to California. Page and Plant get into a bit of Johnny Burnette's Cincinnati Fireball before Black Country Woman. Unfortunately, the remainder of the tape is plagued by constant volume fluctuations. Page's fingers fly across the fretboard during an excellent performance of White Summer/Black Mountain Side. The recording ends as Kashmir comes to a close.
The tape is fairly clear, if a bit distant and noisy in the high end. Unfortunately, the recording deteriorates as the show progresses.
Click here for an audio sample courtesy of Black Beauty.