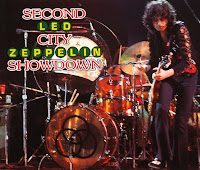 7/6/1973 Chicago, IL  Second City Showdown
Rock and Roll, Celebration Day, Black Dog, Over the Hills and Far Away, Misty Mountain Hop, Since I've Been Loving You, No Quarter, The Song Remains the Same, The Rain Song, Dazed and Confused, Stairway to Heaven, Moby Dick, Heartbreaker, Whole Lotta Love, Communication Breakdown
The first show after a month long hiatus and the band starts off a bit rusty. Plant has lost his voice completely, squawking and squelching his way through Rock and Roll. The crowd is a bit rowdy tonight with fights breaking out in front of the stage, which Plant comments on following Over the Hills and Far Away. His injured voice lends a mournful tone to an elegantly restrained Since I've Been Loving You. A beautiful performance. A cut in the tape at the transition into The Rain Song leaves us at the beginning of the first verse.
Before Dazed and Confused, Plant tells the crowd "I never seen so many fights at one concert." There are a number of brief dropouts in the right channel during the lead-in to the bow solo. The guitar solo/workout section is a bit of a disjointed mess. Despite some good sticky-fingered soloing from Page, the band never really locks into one another. Page skips the Mars, the Bringer of War section, heading directly into the return to the main riff as Bonzo and Jones try to catch up. As the song ends, Plant once again expresses his frustration with the continuing outbreak of fights in the crowd. Page's guitar solo during Stairway to Heaven starts out promising, but loses momentum near the end.
Bonzo is introduced as "the pacifist of our outfit" before Moby Dick. There is a cut in the tape about ten minutes into the drum solo. Before Heartbreaker, Plant tells the crowd "I've never seen so much leeriness and violence, so cool it, cool it for goodness sake!" The haphazard interaction between Page, Jones, and Bonzo during the theramin freakout in Whole Lotta Love gives the impression that they can neither see nor hear one another at all. Plant completely shreds what little is left of his voice during the final "love!" Against all logic, the band returns to the stage to close the show with Communication Breakdown. Surely a night to forget.
The tape is another excellent soundboard recording.

This gig made me even more sad, than Seattle '77. Unfortunately this is indeed a night to forget. I'm pretty sure, the band wasn't happy with the performance either and sometimes it seemed to me that they wanted to get over with it. They definitely had a bad day.

The Mars, Bringer of war section actually was played. It took me a few listens to really appreciate how good this Dazed and Confused was.