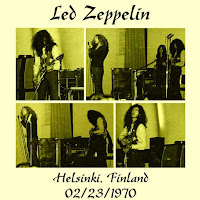 2/23/1970 Helsinki, Finland  (master>eq>1st gen>cdr)
We're Gonna Groove, I Can't Quit You Baby, Dazed and Confused, Heartbreaker, White Summer/Black Mountain Side, Since I've Been Loving You, Thank You, Moby Dick, How Many More Times, Whole Lotta Love
Page's soloing is bluesy and soulful during I Can't Quit You Baby. Plant is in top form, shaking his mic violently as he wails. Page disappears during the second verse of Dazed and Confused, leaving Plant, Jones, and Bonzo sounding a bit lost. He returns in time for the lead-in to the bow solo. The guitar solo is a bit hurried and disjointed, Page's fingers seem to get in his way. Plant introduces White Summer/Black Mountain Side as "white cock."
The second appearance of Since I've Been Loving You is introduced as a minor key blues featuring Jones on Hammond organ. This rendition is much closer to the version on Led Zeppelin III than the previous performance. A very short organ intro by Jones precedes the second appearance of Thank You, which features a soulful guitar solo from Page. There is a strange tape disturbance at the beginning of Moby Dick, it sounds like someone recorded over a few seconds of the tape with a man speaking in a foreign language. Page is still in his own world of chaotic inspiration at the beginning of How Many More Times, always slightly ahead or behind the rest of the band. The ever-extending medley includes frantic renditions of Boogie Chillen, Move on Down the Line, and a surprise Be-Bop-A-Lula, among others. The announcer has the entire crowd chanting "come back!" before the band returns to close the show with Whole Lotta Love.
The tape is a bit muffled, but fairly clear with Page in front and Plant buried under the rest of the band.

1970-02-23, Kulttuuralo, Helsinki, Finland (From Source)
Show starts off with a quick We're Gonna Groove and then jumps into I Can't Quit You Baby. Sound is decent, at times Plant is in the background, but there isn't too much tape hiss and such. An impressive Dazed and Confused follows, and then Heartbreaker. White Summer was next, and as usual Plant really burns thru it, always a great listen. During Since I've Been Loving You, Page's guitar overpowers everything else, and this continues thru Thank You as well. Moby Dick has a splice of overdub speaking in it near the start, but otherwise sounds good. Show ends with a lengthy How Many More Times and Whole Lotta Love. Overall, fairly decent sounding, with Page out in front, Plant's vocals often in the background. Listened to while working, so wasn't giving it my full attention.