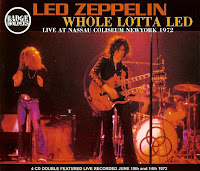 6/15/1972 Uniondale, NY  Whole Lotta Led
Immigrant Song, Heartbreaker, Black Dog, Since I've Been Loving You, Stairway to Heaven, Going to California, That's the Way, Tangerine, Bron-Y-Aur Stomp, Dazed and Confused, What is and What Should Never Be, Moby Dick, Whole Lotta Love
The tape begins with the first appearance of the droning intro before the sonic attack of Immigrant Song crashes into motion. Someone near the taper sings along with Plant during the first verse. Page tears through the guitar solo as Bonzo causes a stampede of drums during Heartbreaker. Plant asks the crowd "was anybody here last night?" before introducing Black Dog as a song "about a dog who used to boogie too much." There is quite a bit of talking/shouting coming from near the taper between and during songs, including someone who sings along with Plant's "sweet jelly roll" line. Since I've Been Loving You is dramatic and powerful. Bonzo is like a tidal wave, repeatedly crashing against the shore.
There is an argument about tickets and seat locations near the taper during the initial verses of Stairway to Heaven. The guitar solo and final rock section are absolutely explosive. Prior to a beautiful Going to California, Plant announces "well, twenty-three is old now, so I gotta sit down" before complaining about the PA. The delicate instrumental section before the final verse is interrupted by someone shouting "everybody smokin' that dope?" very close to the taper's microphone. That's the Way is ruined by the talking and random yelping of the tapers. Plant dedicates Tangerine to "the good times." Unfortunately, the tape is cut after just over a minute. There is a cut during the instrumental breakdown in Bron-Y-Aur Stomp, which includes the first appearance of Plant's "Stryder!" call at the end of the song.
The lead-in to the bow solo during Dazed and Confused features an excellent driving improvisation followed by a great jazzy interlude, courtesy of Bonzo. Page is on fire during the frenzied guitar solo/workout section. Another excellent rendition of The Crunge is followed by even more high-flying guitar heroics, even managing to shut the tapers up for a few minutes. The Mars, the Bringer of War section is devastatingly heavy. Page solos wildly as Plant's chants echo over the crowd during the outro. A true epic, one of the best thus far.
Plant announces "somebody's thrown me a capsule... I'm gonna have to hand this in I'm afraid" before What is and What Should Never Be. He introduces Bonzo as "our number two vocalist" before Moby Dick. Unfortunately, only the intro and outro survive. The Everybody Needs Somebody to Love section during Whole Lotta Love is a frenzied cacophony. The medley includes Boogie Chillen', which Plant introduces by saying "I think this is the national anthem," Johnny Otis's Willie and the Hand Jive, Hello Mary Lou, Money Honey, Heartbreak Hotel, during which Plant defiantly insists that the houselights go down, and John Lee Hooker's Bottle Up and Go. Unfortunately, the tape is cut during Goin' Down Slow, ending the recording. A truly inspired performance. Must hear.
The tape is clear, but the tapers' running commentary can be a bit distracting at times.
Click here for an audio sample courtesy of Black Beauty.

The dam taper asking his friend if he knows what a piper is during STH. .smh. . band was great this night. . 45 years on. .