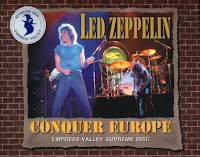 6/29/1980 Zurich, Switzerland  Conquer Europe
Train Kept a Rollin', Nobody's Fault But Mine, Black Dog, In the Evening, The Rain Song, Hot Dog, All My Love, Trampled Underfoot, Since I've Been Loving You, Achilles Last Stand, White Summer/Black Mountain Side, Kashmir, Stairway to Heaven, Rock and Roll, Heartbreaker
After the disaster in Nuremberg two days prior, the band is back with a vengeance, pummeling the crowd with the thunderous one-two punch of Train Kept a Rollin' and Nobody's Fault But Mine. Unfortunately, the momentum is interrupted when Bonzo and Jones forget the entrance of the guitar solo during the latter, causing Page's playing to suffer slightly from the confusion. Plant asks the crowd "anybody remember Montreux?" following Black Dog, joking "showin' your age, kids." The Rain Song is introduced as "a slow one that's got nothin' to do with being silly." Page shreds wildly through a blistering guitar solo near the end of Trampled Underfoot. Since I've Been Loving You is a bit subdued, with a few short bursts of inspiration during the guitar solo.
The band hammers through an urgent Achilles Last Stand. Kashmir is a disaster. The band completely loses track of one another early in the song, resulting in several bars of absolute confusion before they finally manage to get back on track. As the song ends, Plant announces "if anybody's bootleggin' that, you'll have to scratch that number cause it wasn't completely correct." The crowd erupts as Rock and Roll crashes into motion. The band closes the show with what will prove to be the final performance of Heartbreaker. Page delivers an instrumental history lesson during the a cappella solo, blazing through brief vignettes of nearly every theme and variation that has appeared in the piece over the years. An outstanding performance. As the band leaves the stage, Plant announces "thank you for being great... see you again one day."
The tape is yet another excellent soundboard recording, briefly augmented by a distant audience source.
Click here for audio samples courtesy of Black Beauty.

To Fritz:
First of all thanks for doing this. I admire your stamina.

Secondly if you only hear 1 concert from this tour make it this one.

You're crazy, the correct answer is Frankfurt, the next night.

I have to agree with Anonymous #2. This show doesn't hold a candle to the next night in Frankfurt, a review of which will be up tomorrow.

Either way, thanks for reading!