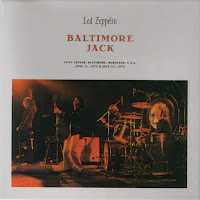 7/23/1973 Baltimore, MD Baltimore Jack
Rock and Roll, Celebration Day, Black Dog, Over the Hills and Far Away, Misty Mountain Hop, Since I've Been Loving You, No Quarter, The Song Remains the Same, The Rain Song, Dazed and Confused, Stairway to Heaven, Moby Dick, Heartbreaker, Whole Lotta Love, The Ocean
Plant is in top form as Rock and Roll gets underway, reaching notes that would have been unthinkable two weeks earlier. Page pauses briefly during the intro to Over the Hills and Far Away to tune his guitar. Since I've Been Loving You is dramatic and powerful. The instrumental section during No Quarter is an epic journey. Plant sings "please sit down" during the first verse of The Rain Song. Unfortunately, there is a cut in the tape soon after which leaves us near the beginning of the heavy section. As the song ends, Plant tells the rowdy crowd "really, I think you gotta be a little bit quieter, because there are a few people who are tryin' to listen to the subtle musical changes."
Page is out of control during Dazed and Confused, soloing wildly and freely changing the song's structure on the fly. The frantic lead-in to the bow solo is immediately followed by the call and response with Plant, integrated with more furious soloing before finally coming back around to the haunting San Francisco interlude. The pace doesn't let up following the bow solo as Page shreds uncontrollably through the guitar solo/workout section, creating a completely new arrangement as he goes. An incredible, highly improvisational performance. Before Stairway to Heaven, Plant tells the crowd "this a song we've played to a lot of audiences... sorta sit down and you can feel throughout the building an amazing feeling which out forefathers a long, long, long time ago knew very well." Page blazes through the guitar solo. Plant pushes his voice to the limit, belting out the final verse in its original melody.
Someone near the taper can be heard shouting "go Jimmy!" as Page begins the fantastic a cappella solo during Heartbreaker. His fingers race across the fretboard in a furious cascade of notes during the explosive guitar solo section. Plant makes a brief reference to Gallows Pole in his boogie rap during Whole Lotta Love. The Boogie Chillen' section features an excellent guitar solo from Page. The band plays a tongue-in-cheek I Do Like to Be Beside the Seaside interlude before closing the show with The Ocean. As the band leaves the stage, Plant tells the crowd "we must love you and leave you, goodnight!"
The tape is distant, hissy, and quite noisy.
Click here for an audio sample courtesy of Black Beauty.

I like this show despite the poor sound quality. When taken as an overall concert, this has probably Robert Plant's best vocal performance since at least the early UK tour in 1972 (and maybe since the 1972 Japanese tour). His voice is surprisingly consistent for the era, and he hits a lot of high notes with ease. After he has his voice operation (circa 1974), you never hear him reach any of the really high notes (on SIBLY for example), except in falsetto. He still hits occasional high notes on this tour, although he does this only sporadically due to the condition that was plaguing his voice at the time.

Other good Robert shows in this era are the MSG shows and the Providence show. As an overall show for the whole band, Providence may be the best of these.

This, along with the Providence, RI show are easily (one could argue the Paris shows as well) the best shows of the '73 tour. It's a shame that the quality is not soundboard on both these shows as they are MUCH better than the much ballyhooed MSG shows (wherein Plant's voice, indeed, the whole band, is showing the strain). Plant is on right from the get go during this show, a fantastic performance!

Simply incredible show—the band's playing here surely features the most energy and fluency since the Offenburg show in March. This and the Providence show days earlier are maybe the last instrumental peaks Led Zeppelin would achieve—after this tour Page would never be quite up for it in the same way again.

Seek dadgad's remaster "A Bloody Act" and pray that a soundboard of this comes out one day!

It’s great working with them both professionally and personally. Video Pipe Inspections

Communication was amazing, and they solved a lot of the problems we faced as a startup Benzo Detox